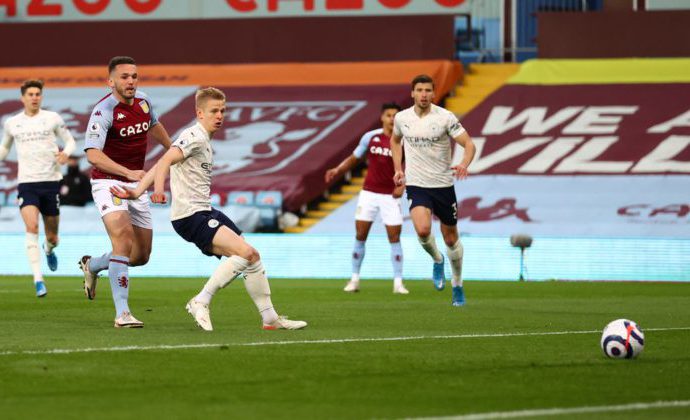 Aston Villa 1-2 Man City: City’s win leaves them 11 points clear of Manchester United with Guardiola saying his side were “so close” to the title.

City were one of 12 clubs to sign up to the breakaway ESL on Sunday but withdrew on Tuesday after widespread criticism of the proposals, which would have seen no promotion or relegation and a split in English football.

However, they had a scare when centre-half John Stones was sent off just before the break for a knee-high challenge on Jacob Ramsey.

But Villa wasted the man advantage when Matty Cash was dismissed 11 minutes into the second half following two bookings in the space of three minutes.

The hosts had earlier gone ahead after only 20 seconds as John McGinn guided a shot past Ederson following Ollie Watkins’ low cross.

The impressive Phil Foden finished off a fine City team move to equalise before Rodri headed what proved to be the winner following Bernardo Silva’s cross.

City led 2-1 when they went down to 10 men, but Villa could not capitalise on the extra player and then offered little threat when it was 10-a-side.

Two first half goals secured the win for Manchester City – and moved them one step closer to another Premier League title!

Stones has been in fine form this season, making more Premier League appearances than he managed in 2019-20, with his performances earning an England recall after 16 months out of the national side.

However, with Three Lions boss Gareth Southgate in the stands, it was an evening to forget for the 26-year-old.

He was caught out in the first few seconds of the match when he failed to collect a long ball from England team-mate Tyrone Mings, enabling Watkins to set up McGinn for the joint quickest Premier League goal of the season.

Stones was then shown a straight red card for a reckless challenge on Ramsey near the halfway line and in front of the two dugouts.

After a check by the video assistant referee Jarred Gillett, on-field referee Peter Banks watched the incident on a pitchside monitor and showed the red card to Stones, although Guardiola was unhappy with the decision and remonstrated with the officials.

Stones will be suspended for Sunday’s Carabao Cup final against Tottenham at Wembley as City, who are also in the Champions League semi-finals, aim to pick up the first of a potential three trophies this season.

With a man advantage, Villa’s Douglas Luiz curled a 25-yard effort straight at Ederson but the match swung back in City’s favour following two Cash challenges on Foden, the second of which was a sliding challenge that wiped out the England midfielder close to the touchline.

Man of the match: Phil Foden