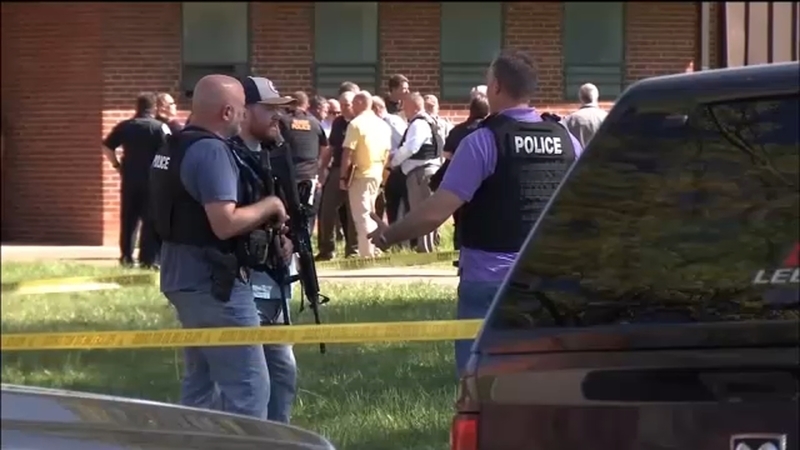 Knoxville Shooting: One Dead, One Officer Wounded | A teenage boy was killed and a police officer wounded Monday afternoon in a shooting at Austin-East Magnet High School in Knoxville, police and sources told.

The Knoxville Police Department confirmed the fatality in an emailed statement and confirmed the shooting without details on its Twitter account. The shooting occurred at about 3:15 p.m. A medical examiner’s vehicle left the school about 5 p.m. One source with direct knowledge of the incident who was not authorized to speak told the wounded police officer is the Austin-East school resource officer. He was shot in the hip, the source told.

Multiple agencies are on the scene of a shooting at Austin-East Magnet High School. Multiple gunshot victims reported, including a KPD officer. The investigation remains active at this time. Please avoid the area. pic.twitter.com/ViQirnQSpx

The source also said one person was detained. Knox County Schools Superintendent Bob Thomas tweeted at 4:20 p.m. that the school had been secured. Austin-East will be closed Tuesday and Wednesday, according to Board of Education member Evetty Satterfield. Classes will not be held online, either.

Neither police nor school officials had taken questions from reporters, or confirmed the number of people shot or their conditions, as of 6:45 p.m. Monday. A press conference was scheduled for 8 p.m.

Police and emergency workers flooded the neighbourhood around 3 p.m. and blocked off access to the school and parts of the neighbourhood. Knox County Schools established a reunification site at the baseball field behind the school near Wilson Avenue and Hembree Street for parents to connect with their children who attend the school.

Gov. Bill Lee mentioned the shooting at a news conference but said he had little information.

“I just wanted to make reference to that and ask, for those who are watching, online or otherwise, to pray for that situation and for the families and the victims that might be affected by that in our state,” he said.

Last week, the Republican governor signed legislation that will make Tennessee the latest state to allow most adults 21 and older to carry handguns — openly or concealed — without first clearing a background check and training. Lee backed the legislation over objections from law enforcement groups, who argued that the state’s existing permit system provided an important safeguard for knowing who should or shouldn’t be carrying a gun.