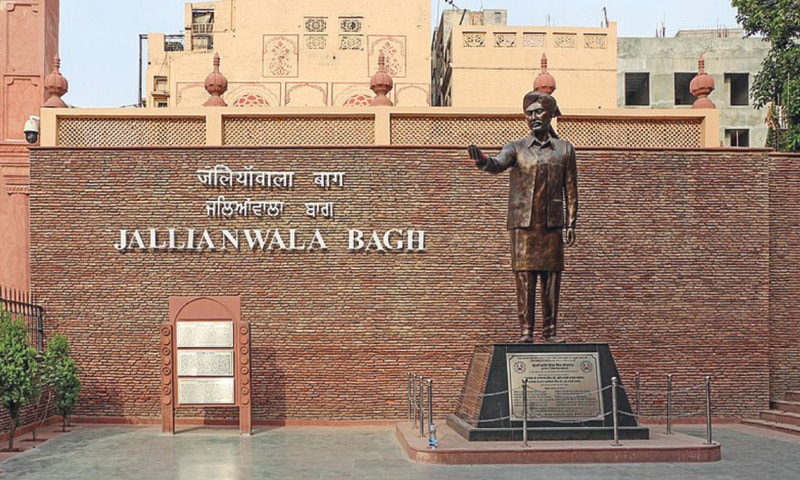 What is the Jallianwala Bagh massacre?

The Jallianwala Bagh massacre, also known as the Amritsar massacre, took place on 13 April 1919, when Acting Brigadier-General Reginald Dyer ordered troops of the British Indian Army to fire their rifles into a crowd of unarmed Indian civilians in Jallianwala Bagh, Amritsar, Punjab, killing at least 379 people and injuring over 1,200 other people. April 13 marks the day of the Jallianwala Bagh Massacre, and this Tuesday is the 102nd anniversary of the incident. The incident is seen as a major turning point in the national freedom movement of India.

What exactly happened that day?

At 9:00 on the morning of 13 April 1919, the traditional festival of Baisakhi. Reginald Dyer, the acting military commander for Amritsar and its environs, proceeded through the city with several city officials, announcing the implementation of a pass system to enter or leave Amritsar, a curfew beginning at 20:00 that night and a ban on all processions and public meetings of four or more persons. The proclamation was read and explained in English, Urdu, Hindi, and Punjabi, but few paid it any heed or appear to have learned of it later. Meanwhile, local police had received intelligence of the planned meeting in the Jallianwala Bagh through word of mouth and plainclothes detectives in the crowds. At 12:40, Dyer was informed of the meeting and returned to his base at around 13:30 to decide how to handle it.

By mid-afternoon, thousands of Indians had gathered in the Jallianwala Bagh (garden) near the Harmandir Sahib in Amritsar. Many who were present had earlier worshipped at the Golden Temple, and were passing through the Bagh on their way home. The Bagh was (and remains today) an open area of six to seven acres, roughly 200 yards by 200 yards in size, and surrounded on all sides by walls roughly 10 feet in height. Balconies of houses three to four stories tall overlooked the Bagh, and five narrow entrances opened onto it, several with lockable gates. During the rainy season, it was planted with crops, but served as a local meeting and recreation area for much of the year. In the center of the Bagh was a samadhi (cremation site) and a large well partly filled with water which measured about 20 feet in diameter.

Apart from pilgrims, Amritsar had filled up over the preceding days with farmers, traders, and merchants attending the annual Baisakhi horse and cattle fair. The city police closed the fair at 14:00 that afternoon, resulting in a large number of people drifting into the Jallianwala Bagh.

Dyer arranged for an aeroplane to overfly the Bagh and estimate the size of the crowd, that he reported was about 6,000, while the Hunter Commission estimates a crowd of 10,000 to 20,000 had assembled by the time of Dyer’s arrival. Colonel Dyer and Deputy Commissioner Irving, the senior civil authority for Amritsar, took no actions to prevent the crowd assembling, or to peacefully disperse the crowds. This would later be a serious criticism levelled at both Dyer and Irving.

An hour after the meeting began as scheduled at 17:30, Colonel Dyer arrived at the Bagh with a group of ninety soldiers from the Gurkha Rifles, the 54th Sikhs and the 59th Sind Rifles . Fifty of them were armed with .303 Lee–Enfield bolt-action rifles. It is not clear whether Dyer had specifically chosen troops from that ethnic group due to their proven loyalty to the British or that they were simply the Sikh and non-Sikh units most readily available. He had also brought two armoured cars armed with machine guns; however, the vehicles were left outside, as they were unable to enter the Bagh through the narrow entrances. The Jallianwala Bagh was surrounded on all sides by houses and buildings and had only five narrow entrances, most kept permanently locked. The main entrance was relatively wide, but was guarded heavily by the troops backed by the armoured vehicles.

Dyer, without warning the crowd to disperse, blocked the main exits. He stated later that this act “was not to disperse the meeting but to punish the Indians for disobedience.” Dyer ordered his troops to begin shooting toward the densest sections of the crowd in front of the available narrow exits, where panicked crowds were trying to leave the Bagh. The firing continued for approximately ten minutes. Cease-fire was ordered only when ammunition supplies were almost exhausted, after approximately 1,650 rounds were spent.

Apart from the many deaths directly from the shooting, a number of people died of crushing in the stampedes at the narrow gates or by jumping into the solitary well on the compound to escape the shooting. A plaque, placed at the site after independence, states that 120 bodies were removed from the well. The wounded could not be moved from where they had fallen, as a curfew was declared, and more who had been injured then died during the night.

Some of the points concluded as part of the Hunter Commission:–

What happened after the Jallianwala Bagh massacre?

Udham Singh, an Indian revolutionary killed Michael O’Dwyer on 13 March 1940 at Caxton Hall in London. O’Dwyer was the Lieutenant-Governor of Punjab at the time of the massacre and was considered as much guilty as General Dyer. Udham Singh was later hanged to death for his actions.