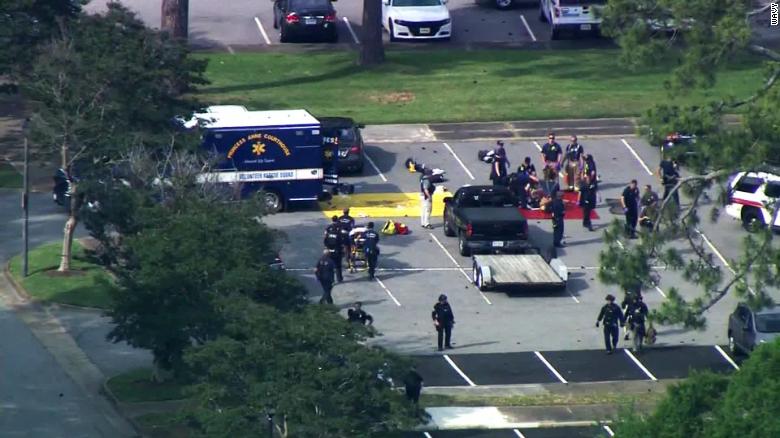 Eight people were shot just after 11 p.m. Friday, Virginia Beach police said in a news release. All eight were taken to local hospitals, with some of their conditions ranging from serious to life-threatening.

One woman died of a gunshot wound on the scene, the release said. At an earlier news conference, police Chief Paul Neudigate said the death possibly stemmed from an unrelated shooting.

Massive police scene at the #VirginiaBeach oceanfront. Overheard a police officer say, “this is bad.” I am currently waiting for an official release from police. #13NewsNow pic.twitter.com/U4f7e5m82E

The release also said one officer suffered minor injuries. Neudigate had said the officer was struck by a vehicle during the investigation.

A different officer fatally shot a man at the shooting scene. While officers were investigating the original shooting, shots were fired nearby, Neudigate said. The officer confronted the man, leading to the deadly gunfire.

The officer has been placed on administrative leave. He has been with the department for five years and is assigned to its special operations division.

The original shooting and the officer shooting were being investigated concurrently, the release said.

While officers were investigating, a report of shots fired came in nearby, the chief said. An officer confronted an individual there and a shooting broke out. The officer shot the individual, and the person died. The officer was not shot.

A second person, who Mr Neudigate said was possibly involved in an unrelated shooting, was pronounced dead near the scene. The chief called it “a separate shooting incident that we’re still trying to piece together.” An officer was also struck by a vehicle during the investigation and taken to a hospital. The officer’s injuries were not considered to be life-threatening.

Mr Neudigate said several people were in police custody but their possible involvement in the shooting was still under investigation. Multiple roads were blocked off throughout the night while police worked in the area.