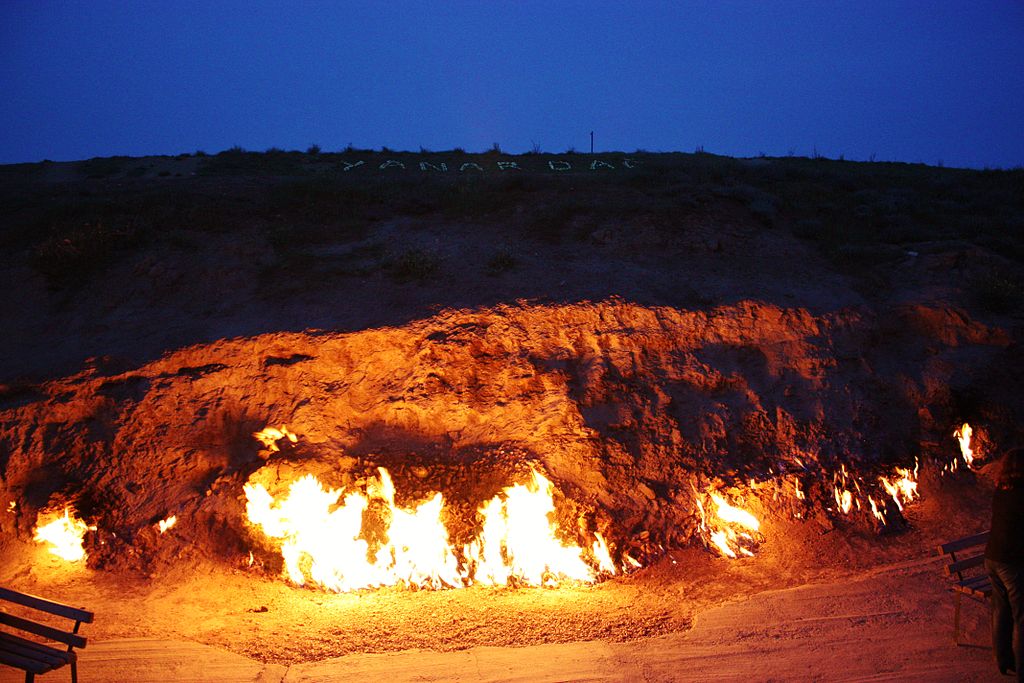 A coal-seam fire is a burning of an outcrop or underground coal seam. A coal seam is a dark brown or black banded deposit of coal that is visible within layers of rock. These seams are located underground and can be mined using either deep mining or strip mining techniques depending on their proximity to the surface.

In India, as of 2010, 68 fires were burning beneath a 58-square-mile (150 km2) region of the Jharia, coalfield in Dhanbad, Jharkhand. Mine fires started in this region in 1916 and are rapidly destroying the only source of prime coking coal in the country.

Coal fires are a serious health and safety hazard, affecting the environment by releasing toxic fumes, reigniting grass, brush, or forest fires, and causing subsidence of surface infrastructure such as roads, pipelines, electric lines, bridge supports, buildings, and homes. Whether started by humans or by natural causes, coal seam fires continue to burn for decades or even centuries until either the fuel source is exhausted, a permanent groundwater table is encountered, the depth of the burn becomes greater than the ground’s capacity to subside and vent, or humans intervene. Because they burn underground, coal seam fires are extremely difficult and costly to extinguish and are unlikely to be suppressed by rainfall. There are strong similarities between coal fires and peat fires.

What Is Its Origin?

Coal seam fires can be divided into near-surface fires, in which seams extend to the surface and the oxygen required for their ignition comes from the atmosphere, and fires in deep underground mines, where the oxygen comes from ventilation.

Mine fires may begin as a result of an industrial accident, generally involving a gas explosion. Historically, some mine fires were started when bootleg mining was stopped by authorities, usually by blowing the mine up.

Two basic factors determine whether spontaneous combustion occurs or not, the ambient temperature and the grain size:

Globally, thousands of inextinguishable mine fires are burning, especially in China where poverty, lack of government regulations and runaway development combine to create an environmental disaster. Modern strip mining exposes smoldering coal seams to the air, revitalizing the flames.

How To Detect It?

Underground coal mines can be equipped with permanently installed sensor systems. These relay pressure, temperature, airflow and gas composition measurements to the safety monitoring personnel, giving them early warning of any problems. Besides studying the geographic, geologic and infrastructural context, information can be gained from direct measurements. These include:

What Is Its Impact On Environment?

Besides destruction of the affected areas, coal fires often emit toxic gases, including carbon monoxide and sulfur dioxide. China’s coal fires, which consume an estimated 20 – 200 million tons of coal a year, make up as much as 1 percent of the global carbon dioxide emissions from fossil fuels.

One of the most visible changes will be the effect of subsidence upon the landscape. Another local environmental effect can include the presence of plants or animals that are aided by the coal fire. The prevalence of otherwise non-native plants can depend upon the fire’s duration and the size of the affected area.

What Is The Method To Extinguish It?

In order to thrive, a fire requires fuel, oxygen, and heat. As underground fires are very difficult to reach directly, firefighting involves finding an appropriate methodology which addresses the interaction of fuel and oxygen for the specific fire in question. A fire can be isolated from its fuel source, for example through firebreaks or fireproof barriers. Many fires, particularly those on steep slopes, can be completely excavated. In the case of near-surface coal seam fires, the influx of oxygen in the air can be interrupted by covering the area or installing gas-tight barriers. Another possibility is to hinder the outflow of combustion gases so that the fire is quenched by its own exhaust fumes. Energy can be removed by cooling, usually by injecting large amounts of water. However, if any remaining dry coal absorbs water, the resulting heat of absorption can lead to re-ignition of a once-quenched fire as the area dries. Accordingly, more energy must be removed than the fire generates. In practice these methods are combined, and each case depends on the resources available. This is especially true for water, for example in arid regions, and for covering material, such as loess or clay, to prevent contact with the atmosphere.

A jet engine unit, known as Gorniczy Agregat Gasniczy (GAG), was developed in Poland and successfully used for fighting coal fires and displacing firedamp in mines.

Some of the more notable mine fires around the world are being experienced in countries like Australia, Canada, China, Germany, India, Indonesia, New Zealand, Norway, South Africa, United States etc.