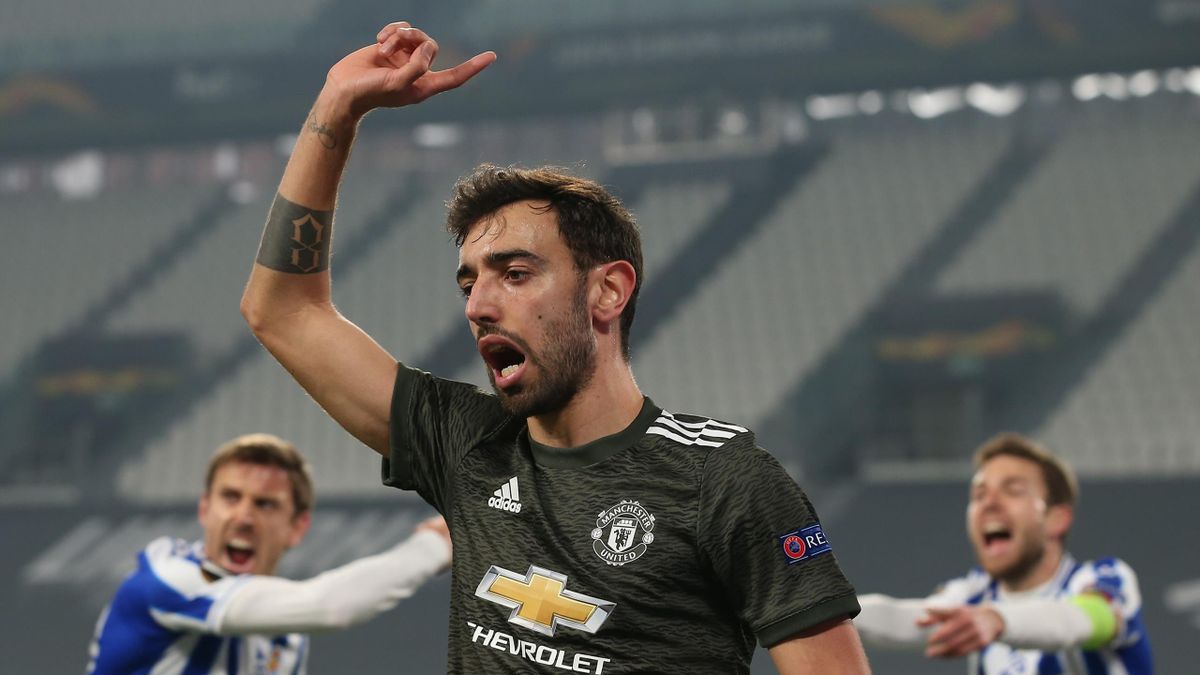 Manchester United dazzled in the second half to surely kill off this Europa League last‑32 tie. Real Sociedad simply had no answer for the pace and ruthlessness embodied by the irrepressible Bruno Fernandes, who scored twice – once in each half – as Ole Gunnar Solskjær’s side made a fine return to winning ways after three consecutive draws.

The Spanish club are at Old Trafford next Thursday for the return leg but there is almost certainly no way back for them. United will hope this win can reignite a season that had stuttered, and will now host Newcastle on Sunday with their confidence sky-high.

“We scored some good goals and played some nice football,” Solskjær said. “We deserved to win but maybe not by four goals. On a night like this when we find spaces we can be a dangerous team.”

The manager rejected the idea there would be any complacency regarding the return leg but did allude to United’s recent poor form. “We’ve got to take one game at a time, we have Newcastle first but we’ll put a strong team out [against Sociedad],” Solskjær said. “It’s about creating momentum, we’ve been through a difficult spell but we found ourselves a little bit tonight. I thought the boys got that little bit of zip in their legs again.”

Fernandes said: “It’s about winning – we did everything well. We have the second leg and still have a tough game at home. We want to win again to go through because we know 4-0 is a good result but we have to be aware of what they can do.”

A hectic start presaged a frantic opening half in which it might have been 2-1 to Sociedad, forced to host this “home” leg at Juventus Stadium because of Covid, inside two minutes. First, Adnan Januzaj was allowed to shoot but did not trouble Dean Henderson. Seconds later, Marcus Rashford went in on Álex Remiro but his finish was driven at the goalkeeper.

While United rued the missed chance, Januzaj again nearly hurt his former team. His pass slipped past the sleepy Eric Bailly, Alexander Isak picked up the ball and let fly at Henderson, who saved.

There was an openness about the contest that was great for the neutral but not for either manager. From the left Januzaj hit in a corner and United’s shaky rearguard was true to type. The ball was allowed to go to ground before Harry Maguire hooked clear.

If that was a concern for Solskjær, his Sociedad counterpart, Imanol Alguacil, felt the same when a slick Fernandes flick found Scott McTominay driving in from the right. The midfielder unloaded at Remiro but the Spaniards survived. It seemed a matter of when, not if, they would be breached, though.

Although Rashford’s radar was awry, he remained a menace and soon turned provider. McTominay fed the 23-year-old, whose chip was cutely allowed to bounce by Fernandes. This took out Remiro and two defenders and, after steadying himself, he finished to register his 51st goal involvement since signing 12 months ago.

It is not news that United are accomplished going forward. The problem is in defence, and each time Sociedad came at them chaos felt near. Aaron Wan-Bissaka, Maguire, Alex Telles and Bailly were constantly caught out of position, and when Isak drilled in a cross none of them were near Nacho Monreal. It took an attacker – Mason Greenwood – to be on hand and close the door.

United’s task for the second half, then, was to be more clinical and stop Sociedad higher up the field when they attacked. The latter part of the demand was not managed well enough, with a flying Maguire block needed to stop Isak having a chance to equalise.

That opportunity suggested the pattern would continue. Soon after, Mikel Oyarzabal picked out David Silva, whose miskick saved United. But then the visitors grabbed a second. Rashford rolled a pass in from the left and Fernandes, ever quick-brained, again dummied. The ball hit James, and the Portuguese fired home.

United’s third came when Fred split Sociedad’s defence with a pass that Rashford sprinted on to, and this time he slotted home expertly. At the close Dan James added United’s fourth, and teenage talent Amad Diallo was given a seven-minute cameo for his debut.