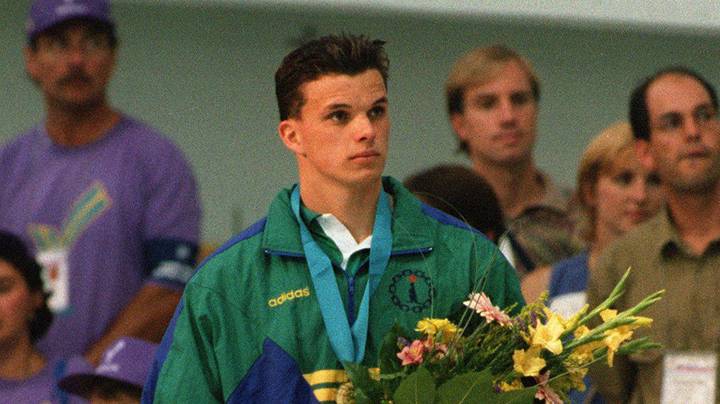 Scott Andrew Miller (born 21 February 1975) is an Australian butterfly swimmer who competed at the 1996 Summer Olympics, winning a silver and bronze medal.

Scott Miller’s spectacular nosedive since winning a silver medal at the 1996 Olympics has landed him in jail, after police arrested him in a pre-dawn raid on suspicion of masterminding a multimillion-dollar drug ring.

Police arrested Miller, 45, at his waterfront home in Rozelle at 6am on Tuesday, following their intercept several weeks ago of $2 million worth of ice. The drug was allegedly concealed in candles and destined for the NSW-Victorian border town of Albury. They also allegedly seized drugs and cash from his home.

In a simultaneous raid, police arrested Wayne Johnson, 47, and allegedly seized drug paraphernalia, other drugs and cash from his Balmain home. Police will allege that the two men had a longstanding relationship.

But Miller was the director of the syndicate, Drug and Firearms Squad Commander John Watson said.

“He’s calling the shots, he’s the head of the syndicate and others, it will be alleged, are working under his instruction,” Detective Superintendent Watson said.

“This was not a small operation. They were well organised and well financed. They were well set up and they were intent on delivering death and misery throughout the state and in this particular case, Albury was their town of choice.”

Miller was the fastest qualifier for the men’s 100 metre butterfly at the 1996 Atlanta Olympics, but was beaten to the gold medal by Russian “submarine” Denis Pankratov, who took most of the first lap underwater and surfaced a metre ahead of the Australian. The rules were subsequently changed to limit the distance swum underwater to 15 metres.

Miller supplemented his silver medal in those games with a bronze in the men’s medley relay, promising to return for a gold medal at the Sydney 2000 Olympic Games. But he spent the intervening years on the party circuit, rubbed shoulders with businessman James Packer and broadcaster Alan Jones, bought a Manly penthouse, tipped in for a racehorse trained by Gai Waterhouse and was crowned Cleo Bachelor of the Year in 1997.

His association with the women’s magazine also introduced him to television personality Charlotte Dawson, who he married in 1999 and divorced six months later.

Amid the tumult, his campaign was also affected by chronic tendonitis and the loss of several sponsors. He swam fourth in the qualifying finals and missed out on a spot at the Games.

He would later give a tell-all interview to Woman’s Day headlined: “Scott Miller’s nightmare marriage: ‘Charlotte left me bleeding and in tears’“, which implied that she had deliberately undermined his bid to compete at the 2000 Olympics. She sued him for defamation and won $225,000 in damages, and in 2012 penned her own book Air Kiss & Tell, which accused him of pressuring her to abort their baby because its due date coincided with the games.

She would later say that “a lot of [her]” still loved Miller and she wanted him to have a fruitful life. Dawson died by suicide in 2014.

Miller, who has been living in a unit block with views across the water to Birkenhead Point, was charged with supplying a commercial quantity of ice, knowingly directing the activities of a criminal group and dealing with the proceeds of crime, and did not apply for bail when his matter was mentioned in Newtown Local Court. He did not appear before the magistrate.

Johnson, who had close-cropped silver hair, asked to be in court while his charges were read. He wore a grey t-shirt. He did not apply for bail and it was formally refused.

Earlier in the year that Dawson died, Miller agreed to be interviewed on 60 Minutes about his life since the Olympics. Journalist Tara Brown opened by saying: “It was said about you, after the 1996 Olympics, Kieren Perkins may have won our admiration but Scott Miller won our hearts. What went wrong?”

Miller looked like he had been punched. He replied: “I ask myself that question a lot.”