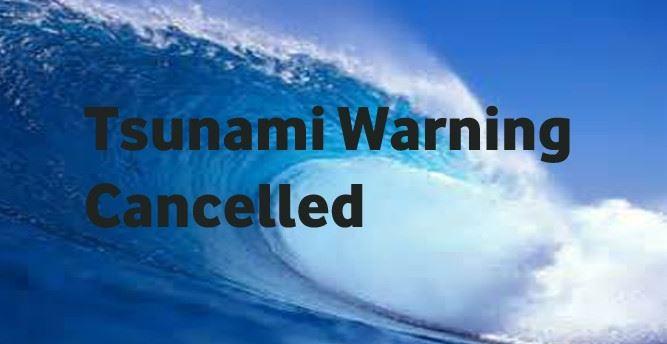 A 7.7-magnitude earthquake struck the South Pacific region early on Thursday morning, triggering tsunami warnings and calls for residents of islands off the Australian east coast to avoid beaches and shore areas.

However, by 7 am AEDT the Bureau of Meteorology had cancelled all warnings related to the event after minimal impact was recorded.

The European Mediterranean Seismological Centre (EMSC) said the 7.7-magnitude quake’s epicentre was 417 kilometres east of Tadine, New Caledonia, and at a depth of 10 kilometres. The quake hit just before 3am AEDT.

The Bureau of Meteorology initially issued a marine tsunami threat to Lord Howe Island, the marine reserve more than 700 kilometres north-east of Sydney, but said evacuations were “not necessary”.

“People in these areas are advised to get out of the water and move away from the immediate water’s edge,” it said in its tsunami bulletin, noting the possibility of dangerous rips, waves and strong ocean currents and localised water overflow onto the immediate foreshore.

The bureau cancelled the warning at 7 am AEDT after the main tsunami waves had passed through the region.

In the hours before the cancellation the impact of the quake had been limited.

Tsunami waves of about 40 centimetres were observed at Norfolk Island, Port Villa and Fiji before 6am AEDT.

“The most significant in our region was a 41cm wave height at Norfolk Island, that you would attribute to the tsunami on top of ocean waves,” Bureau of Meteorology forecaster David Wilkie said. Tsunami waves of 35cm at vanuatu and 35cm at the Gold Coast were also recorded.

Mr Wilkie said, despite the cancellation, residents in the area might still observe unusual wave conditions and water overflow.

The main tsunami waves have now passed all expected Lord Howe Island locations. Small unusual waves may continue, but Tsunami Warnings for Lord Howe Island have been cancelled. NSW State Emergency Service will advise the All Clear when safe to return to coastal areas.

The New Zealand National Emergency Management Agency said people should get out of the water, off beaches and away from harbours, rivers and estuaries in areas from Ahipara to Bay of Islands, Great Barrier Island and from Matata to Tolaga Bay.

“We expect New Zealand coastal areas to experience strong and unusual currents and unpredictable surges at the shore,” the agency said in a statement.

“Strong currents and surges can injure and drown people. There is a danger to swimmers, surfers, people fishing, small boats and anyone in or near the water close to shore.”

The quake’s strength was upgraded from an earlier magnitude of 7.2. It followed at least three other tremors in the region with magnitudes ranging from 5.7 to 6.1 in a span of just over an hour.

The US Tsunami Warning System said a tsunami watch was in effect for American Samoa and cited a potential for tsunamis in other regions including Vanuatu, Fiji and New Zealand.

Waves reaching up to a level of one metre above the normal tide level were possible for some coastal areas of Vanuatu, Fiji and New Zealand, it added.