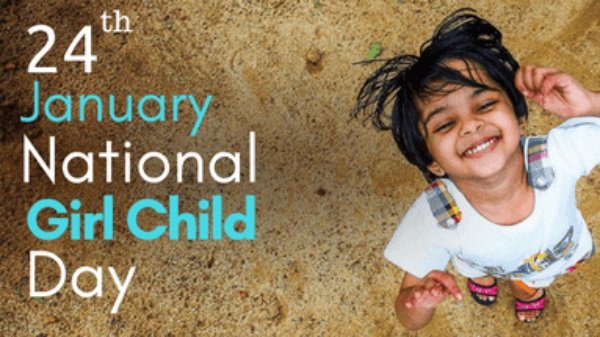 The National Girl Child Day is celebrated in India every year on January 24. It was started by the Ministry of Women and Child Development and the Government of India in 2008, with the purpose to spread awareness among people about all the inequalities girls face in the Indian society. The day is celebrated by organizing various programs including awareness campaigns on Save the girl child, child sex ratios, and creating a healthy and safe environment for a girl child.

In 2019, it was celebrated with the theme of ‘Empowering Girls for a Brighter Tomorrow’.

Today is also a day to specially appreciate all those working towards empowering the girl child and ensuring she leads a life of dignity and opportunity. #DeshKiBeti

To spread awareness about the challenges a girl child faces, National Girl Child Day is observed across India on January 24 every year. The event was first observed by the Centre in 2008 as a part of the initiative launched by the Ministry of Women and Child Development to spread awareness among society to treat girl children equally and educate them. To mark National Girl Child Day, the government organises awareness campaigns under Beti Bachao, Beti Padhao (save the girl child, educate the girl child)) scheme for increasing the consciousness of people towards female foeticide and to provide new opportunities to girls in society.

All girls are entitled to the right to a safe, healthy and educated life. However, the presence of historical and structural biases against the female gender in our society continues to hold back the fulfilment of their basic human rights. Besides age-old social ills, new forms of gender inequalities have emerged through the years, steering girls away from emancipation.

To deal with issues of the present, we must acknowledge and learn from the successes of the past. Dhoti-clad Mahatma Gandhi, during his fight to liberate India from the British rule, firmly believed that the country cannot gain independence if there is no empowerment of women and they remain alien to the freedom movement. If effectively supported during formative years, girls can change the world –both as empowered females of the present and as mothers, workers, mentors, entrepreneurs and politicians of tomorrow. Today, girls are shattering barriers posed by exclusion and stereotypes and making their voice heard across fields. They are shaping a better tomorrow, a more equitable and prosperous future for all.

In a real life rerun of Bollywood movie Nayak, Haridwar’s teenager Srishti Goswami becomes the chief minister of Uttarakhand for one day on Sunday. A student of BSc Agriculture at BSM PG College in Roorkee, Goswami has been given this opportunity to mark the National Girl Child Day 2021, which is observed on January 24 every year. The move has received the nod of Chief Minister Trivendra Singh Rawat .

As she takes charge of the hill state for one day, Goswami will review various schemes run by the Trivender Singh Rawat government in Uttarakhand. These schemes include Atal Ayushman Scheme, Smart City project, Homestay Scheme by the tourism department, and other development projects. The teenager has participated in many programs on International Girl Child Day.

1 thought on “National Girl Child Day: Every Thing You Need To Know”