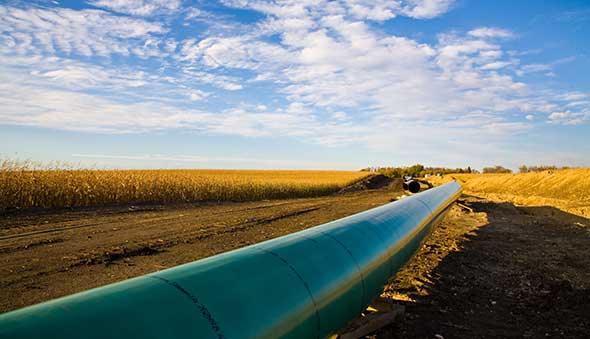 Keystone XL is the proposed fourth phase of the Keystone Pipeline network between Canada and the US, which aims to cut short the distance between Alberta’s oil sands and the Texas Gulf Coast, where most of North America’s refineries are situated.

The first three phases of Keystone are complete, and are currently carrying 5.5 lakh barrels of oil every day to the US from Canada via a longer route.

The planned 1,897 km XL pipeline’s more direct route, as well as larger diameter, would boost the oil supply from Canada, potentially carrying 8.3 lakh barrels of oil per day. It would be privately financed, with costs of building shared by Canada-based TC Energy and other oil companies. The XL pipeline would carry both Canadian and American oil to refineries in Texas, from where it can be exported.

The controversial XL pipeline, if built, will become part of a larger pipeline network that is already in existence. This functioning network, which is also called Keystone, connects oil sands in Canada’s Alberta province to refineries in the US states of Illinois and Texas.

After US President-elect Joe Biden takes office on Wednesday, one of the first actions the Democrat might take is cancelling the permit for the $9 billion Keystone XL pipeline project, a Canadian Broadcasting Corp (CBC) report said.

The controversial XL pipeline, if built, will become part of a larger pipeline network that is already in existence. This functioning network, which is also called Keystone, connects oil sands in Canada’s Alberta province to refineries in the US states of Illinois and Texas.

A key reason is that the oil sands in Canada are landlocked, and a direct connection to international markets through the Texas refineries and ports would mean that they can be further developed. This would benefit the energy industry in both Canada and the US.

Another important reason stated is that if North America increases its own supply of oil, it can further reduce its reliance on imports from the Middle East, thus providing fuel at lower prices for domestic consumers. President Donald Trump has claimed that 28,000 jobs would be created for the pipeline’s construction.

Environmentalists claim that building the pipeline would signify a commitment to developing the Alberta oil sands, where oil production is set to double by 2030. They argue that if the pipeline is built, it would increase North America’s reliance on fossil fuel. This would not only take away the focus from developing renewable sources, but also end up exacerbating climate change.

There are complaints about the carbon footprint of extracting Canadian oil, too. The fuel extracted from Alberta’s oil sands is bitumen, an inferior quality of petroleum. Its extraction process is more akin to mining than conventional oil drilling, and generates 15 per cent more greenhouse emissions compared to the production of one average barrel of oil used in the US, as per The Washington Post.

There is also opposition in the US state of Nebraska, where leaks from the pipeline could threaten the Ogallala Aquifer, among the world’s largest fresh water reserves which provides drinking water to 20 lakh people in eight US states. Experts say the Canadian bitumen could be especially harmful to the waterway, because unlike conventional crude, which floats on top of water in case of a spill, some of bitumen’s heavy elements settle to the ground, rendering conventional cleanup technologies redundant.

Native American groups have also opposed the project, saying the pipeline construction would affect water supplies upstream of many of their reservations.

Because the proposed pipeline crosses the international border, it requires the approval of both national governments. Although Canada approved the XL project in 2010, former US President Barack Obama, a Democrat, axed it in 2015, saying it would increase greenhouse emissions, and that Canada would reap most of the project’s benefits.

Then in 2017, Republican President Trump, who openly questions the veracity of climate change, reversed Obama’s decision soon after taking office, allowing the pipeline to move forward.

According to a Reuters report, the XL pipeline’s construction is currently underway in Canada, and the border crossing with the US is complete. In all of the US states that the pipeline passes through, construction is taking place on pump stations, the report said.

Now, as the White House again returns to Democratic hands, the project could again get in jeopardy. In the past, Biden has already declared that he would cancel the XL pipeline’s permit if elected.