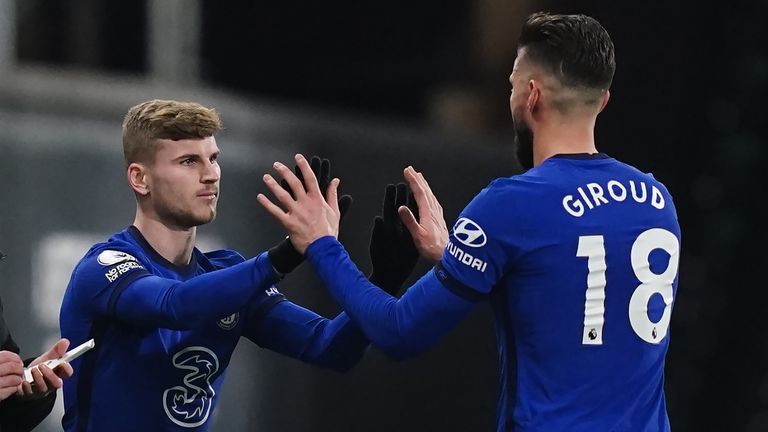 The England international looked to be the man with the most to lose coming out of a summer when Kai Havertz, Hakim Ziyech and Timo Werner arrived at Stamford Bridge at great expense to add competition to the attacking midfield and forward spots.

But there was Mount on Saturday, starting for Chelsea for the 12th straight English Premier League game — he has played 90 minutes in all of them — and grabbing a badly needed winner for Lampard against Fulham at Craven Cottage.

Mount’s 78th-minute goal in a 1-0 victory capped a man-of-the-match performance where Chelsea’s more high-profile players again came up short against a team which played the entire second half with 10 men, following the 44th-minute sending-off of U.S. international Antonee Robinson.

Werner came off the bench in the 75th and squandered a glorious, one-on-one chance in stoppage time, summing up a striker short of confidence after one goal in two months for club and country.

Havertz, signed for $92 million and supposedly a direct threat to Mount, never got onto the field in a sign that he is still not fully trusted by Lampard.

Ziyech was substituted after 75 minutes, having offered little.

Mount was there, of course, until the end. He is a trusted lieutenant of Lampard, who had the young, hard-working Englishman with him when manager of Derby County in the second-tier Championship in the 2018-19 season.

“His quality and attitude is brilliant,” Lampard said of Mount, who has started 16 of Chelsea’s 18 games — second only to N’Golo Kante.

Mount’s goal came when he drilled home a loose ball from a central position inside the area after Fulham goalkeeper Alphonse Areola scooped away a cross, and it brought Chelsea only its second win in its last seven league matches.

That poor recent run plunged Chelsea to ninth place and prompted scrutiny on Lampard, the club great who is in just his third year in senior soccer management and facing huge expectations this season.

“I won’t say I was blown away with the performance,” he said.

Also under scrutiny this weekend are goal-scoring players, with the British government having told teams to avoid close contact such as hugging and kissing during celebrations as the country battles the coronavirus pandemic and remains in lockdown.

One player who stuck to the protocols was James Maddison, who scored Leicester’s first goal in its 2-0 win over Southampton and responded by waving away his approaching teammates and applauding himself repeatedly.

Leicester jumped into second place with a joint-best 11th victory of the campaign, splitting leader Manchester United and champion Liverpool ahead of their much-anticipated match at Anfield on Sunday.

Sam Allardyce is known for his acts of escapology as a soccer manager, and it might be his greatest feat yet if he is able to keep West Bromwich Albion in the Premier League.

A month after taking charge of the relegation-threatened team, “Big Sam” — as he is widely known — got his first win at Wolverhampton 3-2 in a Midlands derby. Matheus Pereira scored the winner with his second penalty of the game.

West Brom stayed second from bottom but moved to within five points of safety.

“If you win two on the trot at this time of year, it’s massive,” Allardyce said, “because it puts the fear of God up the teams above us … we have given ourselves a three-point platform.”

Burnley is the team sitting just above the bottom three, in 17th place, after losing to West Ham 1-0 courtesy of Michail Antonio’s goal.

Brighton jumped a place and a point above Burnley by also winning at Leeds 1-0, with Neal Maupay scoring a well-worked team goal in the 17th.