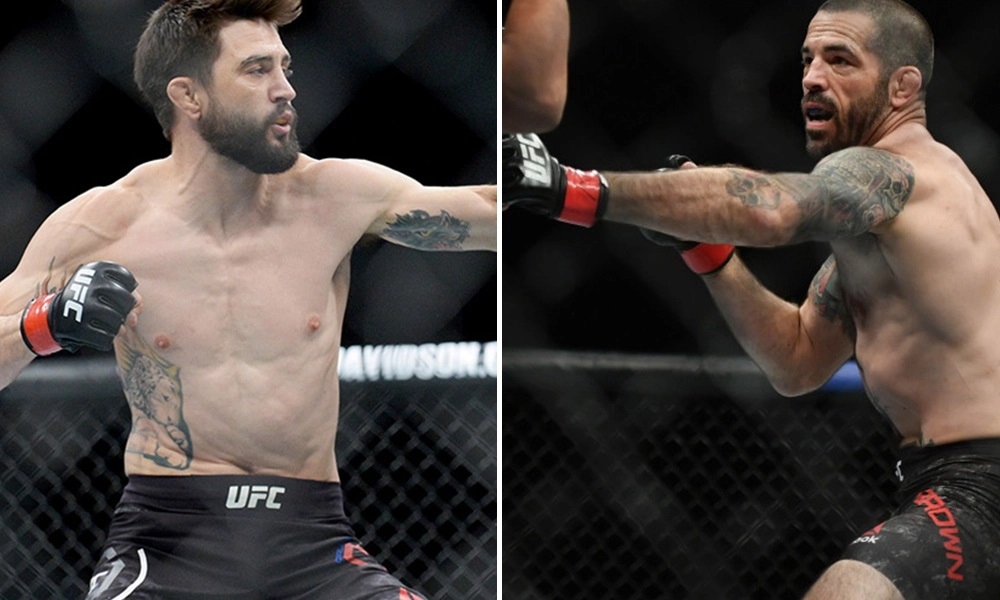 Marc Goddard is the third man in the cage for this co-main event. No feeling out for these two as Brown takes the center of the cage and Condit fires off one of his trademark combos. Condit coming out with volume early, and lots of kicks. Brown hasn’t thrown much but does duck into a clinch when Condit runs in with a combo. Brown gets the trip takedown and now he’s in top side-control against the fence. Also, it appears that Brown is bleeding somewhere but unsure what caused the cut. Condit recomposes his guard but Matt Brown is staying active with elbows. Brown is bleeding pretty well though. The booth says Brown scraped his head on the fence during the takedown but we haven’t seen the video of it yet.

Meanwhile, Brown is still controlling the position and landing strikes and Condit is trying to create scrambles to no avail. Now Condit is threatening an armbar but Brown is wise and postures. Brown back to work with elbows on top and Condit still scrambling. Brown has been controlling very well but Condit finally gets up against the cage and hits a switch! Now Condit is on top but there is short time. Brown rolls onto a leg but can’t get anything going and eats some shots for his trouble before the round ends.

In classic Carlos Condit fashion, his total inability to wrestle lost him the first round. Let’s see if he can avoid the takedowns moving forward.

Condit leads round two with lots of kicks and more pressure. But Brown backs him up and lands a nasty stepping elbow that seems to have buzzed Condit. Condit doing a good job of walking it off but he was clearly hurt. Now Condit lands a kick to the body that seems to hurt Brown. Brown counters by shooting a takedown but Condit defends. Back at space, Condit throws a kick but gets knocked off balance by a shot from Brown. He gets back to his feet though and the two are now trading in the center.

Condit throws a stepping elbow but Brown avoids and clinches, driving Condit to the fence. Condit is defending the takedown now and even attempts his own throw but doesn’t succeed. It’s enough to get Brown off him though and Condit lands a right hand.

Condit lands an in-stepping scissor sweep! That was freaking awesome! Brown gets back up but Condit grabs a single and drags him back down. Brown seems to be tiring somewhat and now Condit is on top and working his own elbows. Brown using a butterfly hook to threaten sweeps but Condit is collapsing it and peppering him. Brown definitely looking like he’s getting tired as Condit steps over into half guard. Condit looks to go to crucifix but Brown starts moving and recomposed guard. Brown breathing heavy now though and still Condit is peppering away with shots from the top until the horn sounds.

It’s either man’s fight heading into the third but Condit certainly appears to be the fresher fighter. Ultimately though, it may come down to who gets the takedown.

Round 3 starts with a kick to the cup from Condit that is going to delay the action and give Brown a chance to recover. Well, nevermind. Matt Brown says he’s good to go and we’re back at it.

Condit lands a glancing head kick off a combo and Brown rersponds with a double-leg takedown but Condit defends. Back in stpace the same rough sequence happens again but this time the two stay clinched and Brown goes for a foot sweep but Condit avoids. Brown staying on him and shoots a single and he’s almost on it but Condit limp legs and steps overr and now Condit has the back! Beautiful sequence from Condit and now he has hooks in and Brown is holding an arm to swim back. He can’t quite do it though and now Condit is in wrestling ride with an anchor hold on Brown’s ankle. Condit uses it to spin Brown and now Brown is on his back with Condit in S guard and moving to mount.

Brown gives up his back and Condit takes it but Brown keeps rolling and scrambles back to his feet! Now Brown is on a double leg but Condit is landing elbows. Condit goes for a kimura trap but can’t get it and now Brown is on top but Condit has a loose triangle on! Great grappling here. After some time Brown postures out and now he’s in full guard but he looks completely spent. Condit landing chipping shots from the bottom and scrambles up. Brown stays on a leg but can’t get him down. Condit lands a good elbow and goes for his own double! He gets it but Brown rolls through and Brown is back on top with short time! This has been really fun. Brown trying to ride the last 20 seconds out and Condit tries to move but Brown is holding tight and the final buzzer sounds.