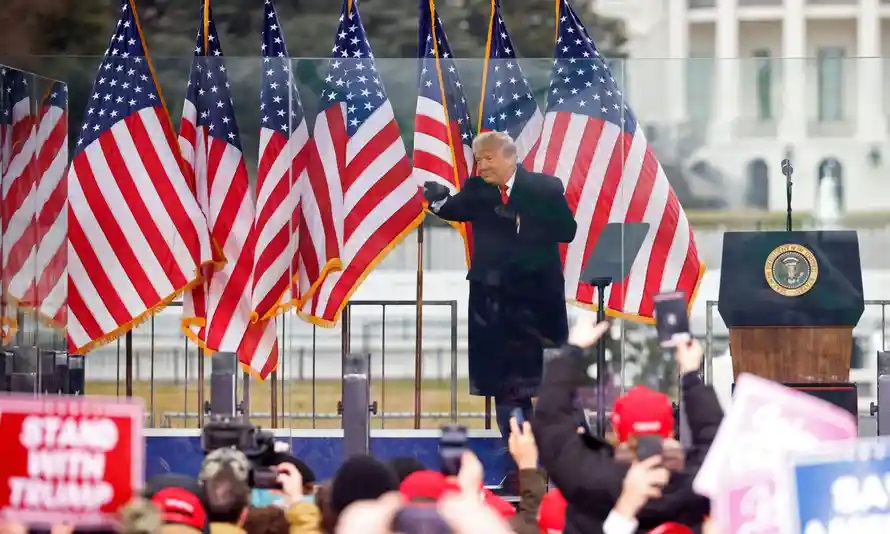 Donald Trump became the first president in the history of US to be impeached for a second time and charged with “incitement of insurrection” over the deadly mob siege of the Capitol in a swift and stunning collapse of his final days in office.

10 of his fellow Republicans joined the Democrats in the House of Representatives on Wednesday to charge him with inciting an insurrection which led to the violent rampage at the Capitol last week.

Trump has issued a statement urging for there to be “no violence, no lawbreaking and no vandalism of any kind”.

Trump’s fiery speech at a rally just before the Jan. 6 riot is at the center of the impeachment charge against him. A woman was fatally shot in the violence that ensued as pro-Trump protestors breached barricades and advanced into the halls of the Capitol building, smashing windows and brawled with police officers in what is widely being considered one of the worst security breaches in US history.

The House had approved a resolution late Tuesday calling on Vice President Mike Pence and the Cabinet to invoke the 25th Amendment to the Constitution to declare the president unable to serve, which Pence opposed, leaving lawmakers with impeachment as their only option to remove Trump from office before Jan. 20, when President-elect Joe Biden is set to be sworn in as president. At least four Republicans, including a member of the House leadership, have said they would vote to impeach Trump for urging supporters to march on the Capitol.

Donald Trump has been impeached again — the first president in US history to be impeached twice by the House.

The question now is whether he'll become the first president to be convicted by the Senate and removed from office. https://t.co/XrYw3zKHcd pic.twitter.com/NoA0DqR5bD

An impeachment proceeding is the formal process by which a sitting president of the United States is accused of wrongdoing. It is a political process and not a criminal process.

The articles of impeachment are the list of charges drafted against the president. The vice president and all civil officers of the U.S. can also face impeachment.

The process begins in the House of Representatives, where any member may make a suggestion to launch an impeachment proceeding. It is then up to the speaker of the House, as leader of the majority party, to determine whether or not to proceed with an inquiry into the alleged wrongdoing.

Over 210 House Democrats introduced the most recent article of impeachment on Jan. 11, 2021, contending Trump “demonstrated that he will remain a threat to national security, democracy and the Constitution if allowed to remain in office and has acted in a manner grossly incompatible with self-governance and the rule of law.”

The impeachment article also cited Trump’s controversial call with the Georgia Republican secretary of state where he urged him to “find” enough votes for Trump to win the state and his efforts to “subvert and obstruct” certification of the vote.

It also cited the Constitution’s 14th Amendment, noting that it “prohibits any person who has ‘engaged in insurrection or rebellion against’ the United States” from holding office.

House Speaker Nancy Pelosi and other Democrats accelerated the procedure and voted just a week before the inauguration of President-elect Joe Biden.

The vote requires a simple majority vote, which is 50% plus one (218), after which the president is impeached.

Trump now faces a trial on the article in the Senate.

The timeline of a potential Senate trial and the likelihood of conviction is unclear. Senate Republican Leader Mitch McConnell said he won’t bring back the Senate from recess before Jan. 19, which could push a trial into the beginning of the Biden administration.

What does an impeachment vote mean for a sitting president and for a former president?

A president can continue governing even after he or she has been impeached by the House of Representatives.

Trump continued to govern after his impeachment in December 2019, and of course, ran for reelection in 2020. After Clinton was impeached on Dec. 19, 1998, he finished out his second term, which ended in January 2001, during which time he was acquitted in a Senate impeachment trial. While Clinton continued governing, and the impeachment had no legal or official impact, his legacy is marred by the proceeding.

Although Trump is set to leave office on Jan. 20, he could face severe punishments that would affect his future in politics, if the Senate moves to convict.

Trump could be barred from running from office in the future. This punishment would require only a simple majority vote of the Senate if the chamber votes to convict.

Also Read: Trump: Know What 25th Amendment Of US Constitution Can Do

The House voted to impeach Trump on Dec. 18, 2019, on two articles of impeachment, one for abuse of power and one for obstruction of justice, in connection with his alleged quid pro quo call with the Ukrainian president.

Johnson faced impeachment in 1868 after clashing with the Republican-led House over the “rights of those who had been freed from slavery,” although firing his secretary of war, Edwin Stanton, who was backed by the Republicans, led to the impeachment effort. The articles of impeachment centered on the Stanton event, according to the Senate.

Clinton, whose impeachment was connected to the cover-up of his affair with White House intern Monica Lewinsky while in office, was 22 votes away from reaching the necessary number of votes in the Senate.

Richard Nixon faced three articles of impeachment related to the Watergate scandal, in which he allegedly obstructed the investigation and helped cover up the crimes surrounding the break-in.

But he didn’t let the process get any further, resigning before the House could impeach him.