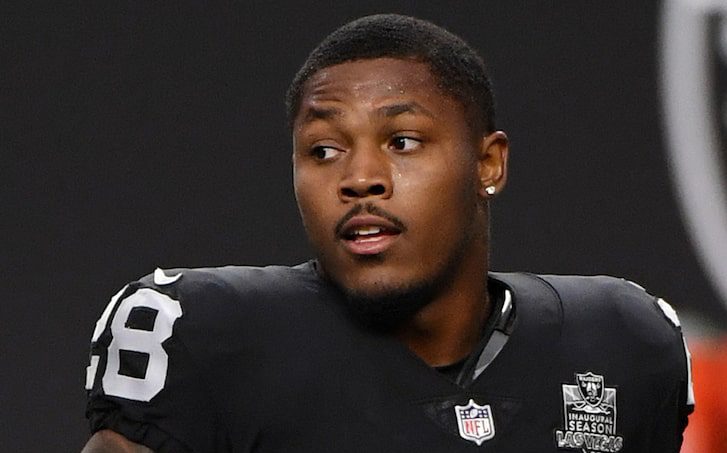 Joshua Jacobs is an American football running back for the Las Vegas Raiders of the National Football League. He played college football at Alabama and was drafted by the Raiders in the first round of the 2019 NFL Draft.

The star running back for the Las Vegas Raiders — was arrested for DUI on Monday after officials say he drunkenly wrecked his car at 4:42 AM.
Joshua Jacobs (born February 11, 1998) is an American football running back for the Las Vegas Raiders of the National Football League (NFL). He played college football at Alabama and was drafted by the Raiders in the first round of the 2019 NFL Draft.

Josh Jacobs was arrested on a DUI charge early Monday morning, hours after the Raiders returned from a season-finale victory at the Denver Broncos. pic.twitter.com/CvZKFwwG5R

The Las Vegas Metro Police Dept. says officers responded to a single-vehicle crash near the Vegas airport on Monday morning … and found the 22-year-old, who appeared to be impaired.

“He was transported to a local hospital due to minor injuries resulting from the collision,” cops say.

“After treatment, he was transported to the Clark County Detention Center where he was booked for DUI.”

Jacobs played for the Raiders on Sunday against the Denver Broncos — posting big numbers, 89 rushing yards and 2 TDs on 15 carries, helping the Silver & Black to a 32-31 victory.

Josh Jacobs, via his attorneys, is adamantly denying allegations he was drunk behind the wheel.
“No complaint has been filed against our client and there are no blood test results to support a suggestion of impairment,” his attorneys, David Z. Chesnoff and Richard A. Schonfeld, said in a statement.
“We intend to enter a not guilty plea on behalf of Mr. Jacobs if he is ever charged.”

Clearly, Jacobs returned to Vegas after the game and that’s where he got into trouble.

In the hours before his arrest, Jacobs posted video on Instagram showing him at a karaoke party with some friends. Everyone looked like they were having a good time.

Jacobs was a 1st-round pick out of Alabama in the 2019 NFL Draft and has flashed some serious superstar potential.

Jacobs has 2,215 career rushing yards since joining the Raiders — with 19 rushing TDs in just 28 starts.

Note: DUI is an acronym for “driving under the influence.” DWI stands for “driving while intoxicated,” or in some cases, “driving while impaired.” The terms can have different meanings or they can refer to the same offence, depending on the state in which you were pulled over.