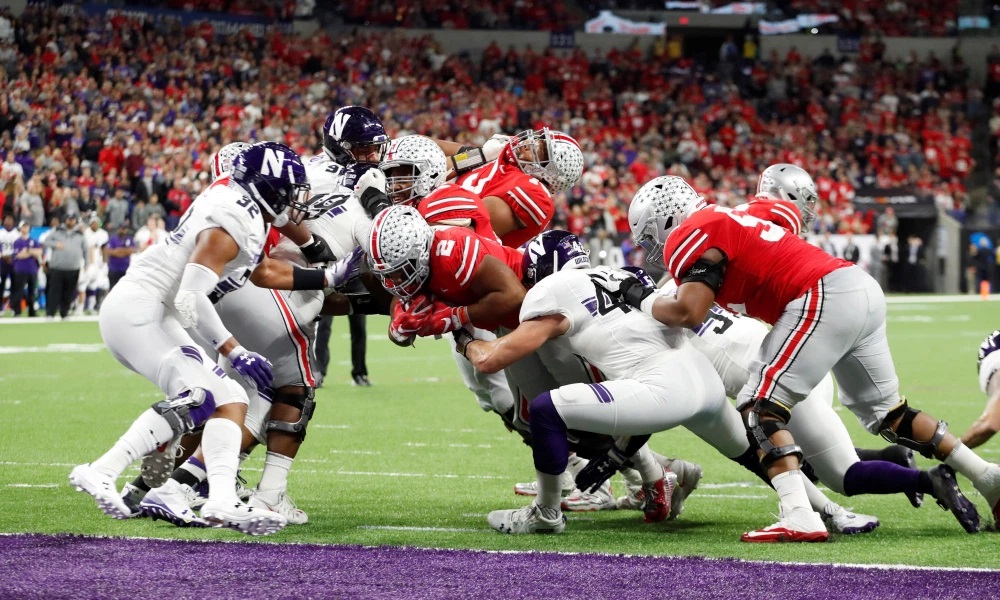 No. 4 Ohio State beat No. 14 Northwestern 22-10 in the 2020 Big Ten Championship Game on Saturday, clinching its fourth consecutive conference title and setting itself up for a potential College Football Playoff berth. It was not a pretty game for the Buckeyes, and it will leave things up to interpretation, but they nevertheless got the job done when it counted.

Ohio State didn’t score its first touchdown until late in the third quarter when it took a 13-10 lead. Before that, it had spent most of the afternoon getting in its own way. The Buckeyes had an impressive opening drive but stalled in the red zone. Justin Fields scored what looked to be a touchdown, but it was brought back by a holding call. That penalty killed the drive and forced Ohio State to settle for a field goal. It was the first time all season the Buckeyes didn’t score a touchdown on their opening drive.

Northwestern responded with a touchdown drive of its own to take a 7-3 lead, and it held onto that advantage until late in the third quarter. The time between was spent with both teams failing to take advantage of opportunities or turning the ball over.

The tide turned for good in the third quarter when Ohio State just leaned on star running back Trey Sermon and its ground game. Sermon took the game over, finishing with a Buckeyes single-game record of 331 yards rushing along with two touchdowns, breaking Eddie George’s previous high (314 yards, 1995). Compare that to Northwestern, which only posted 329 yards of offense as a team. Sermon also broke the Big Ten title game’s rushing record.

Here are four takeaways from another Big Ten title for the Buckeyes.

The only plausible scenario I can imagine that would include the committee reversing course would be if Florida beats Alabama in the SEC Championship Game. If that happens, it’s hard to imagine Alabama falling out of the top four. It’s also hard to imagine an SEC champion being left out, but that SEC champion would have two losses, one of them to a bad LSU team. Suddenly, the debate would become one of whether or not 6-0 is better than 9-2 with a win over Alabama. Boy, won’t that be a debate I want nothing to do with.

Sermon finished with 331 yards rushing and two touchdowns, but it’s not as if all those yards came in the second half. He was crushing it in the first half as well, but after he would pick up chunk yardage, the Buckeyes would decide to start throwing the ball, and it kept hurting them. Whether it was the receiver not getting open, Fields holding the ball too long or just a lack of accuracy, Ohio State’s passing attack killed drives.

It wasn’t until Day just decided to keep giving the ball to Sermon that Ohio State’s offense became unstoppable. If I’m an Ohio State fan, I’m spending the next couple of weeks hoping Day doesn’t forget that before the College Football Playoff (or whatever bowl Ohio State plays in).

The script was written for Northwestern to pull off the shocking upset. They lured the Buckeyes into their kind of ugly game and kept it close. But every time the Wildcats were presented with a chance to take control, they messed up. They opened the second half with the ball and a 10-6 lead and drove into the red zone. Then with a chance to go up 17-6 and put all the pressure on the Buckeyes, Peyton Ramsey was picked off in the end zone. Ramsey would turn the ball over a couple more times, and that’s ultimately what cost the Cats the game.

Every time you watch Northwestern, you get the sense that it shouldn’t have a chance to win the game, yet there it is, usually winning the game. Northwestern just lost its athletic director Jim Phillips to the ACC commissioner job, but the first thing Phillips’ replacement does should be whatever it takes to make sure Fitzgerald remains in Evanston, Illinois, for the rest of his career. It’ll make their job a lot easier.

1 thought on “Ohio State vs. Northwestern: Score and Takeaways”