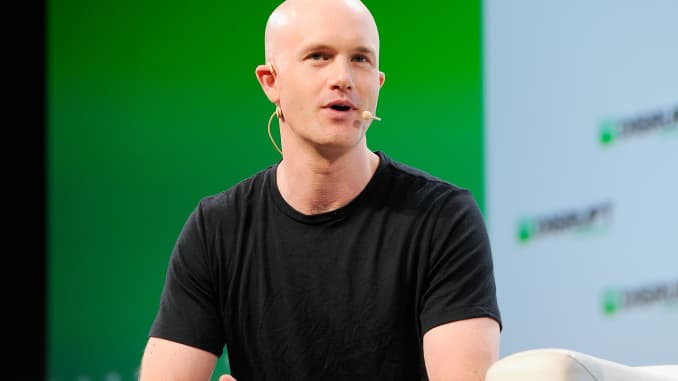 As the price of Bitcoin blew past its previous record of just under $20,000—to new all-time highs exceeding $23,000 per Bitcoin on Thursday, the chief executive of Coinbase, America’s biggest cryptocurrency exchange, broadcasted a warning.

“We cannot emphasize enough how important it is to understand that investing in crypto is not without risk,” Armstrong wrote in a blog post on the company website. He highlighted the resurgent asset’s incredible volatility, a characteristic that may shock traditional investors more accustomed to their retirement fund holdings’ usually steady, years-long march up-and-to-the-right. “The market can move in either direction much faster than equity markets,” he said.

The sentiment of Armstrong’s post matches what most financial advisors would recommend to clients when it comes to risky investments: Don’t put up anything you’re not willing to lose.

“We likewise caution investors who may be focusing on short-term speculation and encourage customers to seek out resources and consult financial advisors to better understand the risks associated with investing in cryptocurrencies,” Armstrong said.

Coinbase makes the majority of its money on fees it earns when people buy and sell Bitcoin on its trading platforms. The company, which is rumored to be eyeing an IPO in the near future, has broadened its product offerings to cater to more professional Wall Street-types in recent years.

Armstrong, one of the cryptocurrency industry’s more introspective Bitcoin bulls, has urged exercising caution before. During Bitcoin’s last run-up in 2017, he told Fortune for a cover story on the cryptocurrency’s stupendous rise, that “we are probably in a bubble.”

While Armstrong’s latest commentary avoids that dreaded “b” word, the implication that the present mania could pop remains. At the time Armstrong made his comments in 2017, the market value of all cryptocurrencies, as measure by CoinMarketCap, a blockchain analytics tracker, exceed half a trillion dollars. Today, after a year marked by the economic ravages of the coronavirus pandemic, the nascent industry’s total market value has exploded above $670 billion as of press-time.

Industry observers have noted that the current latest bull run is different from the last time around as more bigtime investors and corporations are getting behind so-called digital gold as a legitimate investment. Fintech-trailblazer Square, tech firm Microstrategy, and life insurer Mass Mutual are among the companies that have bought up Bitcoin—and that’s to say nothing of the many hedge funds and asset managers Bitcoin has won over as converts.

Armstrong frequently communicates via blog posts. He received blowback for a recent post declaring that Coinbase would remain “apolitical” and not weigh in on social issues, bucking a trend of Corporate America. Sixty employees who disagreed with the policy took buyouts and left.

Ultimately, Armstrong tells people not to do anything too rash during this moment of exuberance. “For those who believe in the potential of crypto, we also all have to believe that we’re still in the very early stages and that there’s a lot more to come,” he said.