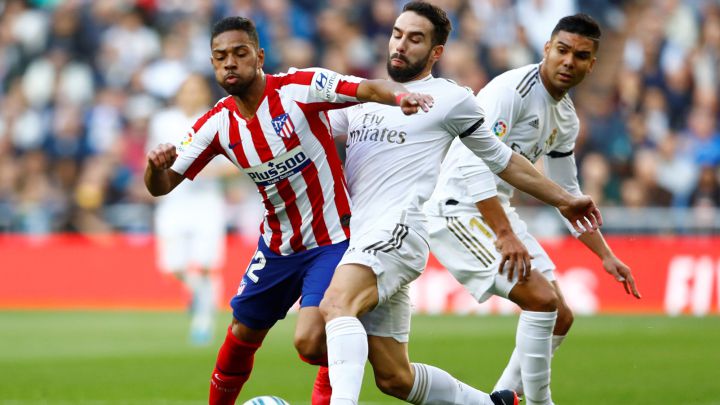 Atletico have been impenetrable this season, and, one could argue, for nearly a decade. This season, as we’ve outlined extensively here on Managing Madrid — of all places — they have improved offensively too. Tonight, none of that offence was apparent, and they conceded the same amount of goals as they have all campaign: two.

That’s the simplified story, the abridged headline. The tactical unfoldment is a bit deeper. Atletico were not bad defensively, but Real Madrid did the right things. They counter-pressed, for one, making it really difficult to Simeone’s men to build out of the back, and it enabled Real to move the Atleti block, somewhat. Toni Kroos, impeccable with his distribution, helped progress the ball, and his quick switches were designed to shift around Atleti’s packed flanks, where both Vazquez and Vinicius Jr had trouble finding space.

In truth, the counter-press was a more of a way of limiting Atletico’s build-up than it was a source of chance creation. In the first half, Atletico were limited to zero key passes, zero shots. Joao Felix, who roamed around the field, was subdued. Atleti had completed just 66% of their passes after 20 minutes. Ferland Mendy (who struggled on the ball, but other wise was good) neutralized Marcos Llorente on the wing.

Diego Simeone made three subs at half-time, introducing Correa, Lodi, and Lemar. Eventually Saul came in for Joao Felix. It wasn’t apparent right away, but Lemar did give Atletico some juice, but couldn’t convert the chances he found himself on the end of. Saul offered long-distance shooting.

For the second consecutive game, Real Madrid come away with three points, and both performances were impressive. Season-defining, even.