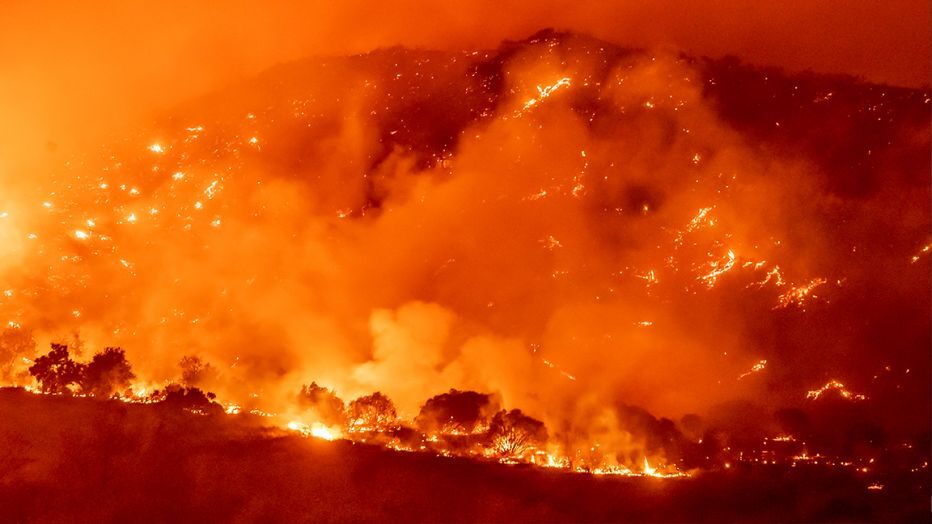 Exacerbated by wind gusts of up to 70 miles per hour and extremely dry conditions, a fast-moving wildfire spread to more than 7,200 acres in Southern California on Thursday, forcing the evacuation of 25,000 residents, officials said.

Two firefighters with the U.S. Forest Service were hospitalized with non-life-threatening injuries that they sustained on Thursday while trying to contain the Bond fire, which had begun the previous night in the Santa Ana Mountains of Orange County, southeast of Los Angeles, the authorities said.

The mountains share the name of the Santa Ana winds, hot winds from the desert that descend on the Pacific Coast area around Los Angeles and often fuel wildfires, according to the National Weather Service. Fire officials attributed the spread of the Bond fire to the winds.

On Wednesday, several hours before the wildfire began, the Orange County Fire Authority had placed the county under a red flag warning and urged residents to be aware of increasing fire danger because of dry and windy conditions.

The blaze began as a house fire in Silverado, about 50 miles from Los Angeles, and quickly spread to the surrounding area, fire officials said. The cause was under investigation.

As of 3 p.m. on Thursday, about 25,000 people had been evacuated in several communities northeast of Irvine, according to emergency responders, who said that there was no containment of the fire.

“We know that a number of houses have been damaged, potentially destroyed,” Brian Fennessy, the Orange County Fire Authority chief, said during an afternoon news conference.

Chief Fennessy said that more than 500 firefighters were battling the flames and that more than 30 agencies were involved in the effort, which included fixed-wing aircraft and helicopters.

He urged residents of the affected communities, some of which were still reeling from a wildfire in October, to use their common sense when deciding whether to evacuate.

Her Dream of a Big Two-Bedroom Became the Reality of a Midsize One-Bedroom. Which of These Would You Choose?

“You don’t have to wait for us to call,” Chief Fennessy said. “If there’s any doubt please evacuate.”

At the same news conference, Sheriff Don Barnes of Orange County warned residents that they should have their medications and other necessities ready to go in case they had to evacuate.

“When you need to go, it’s go then,” Sheriff Barnes said.