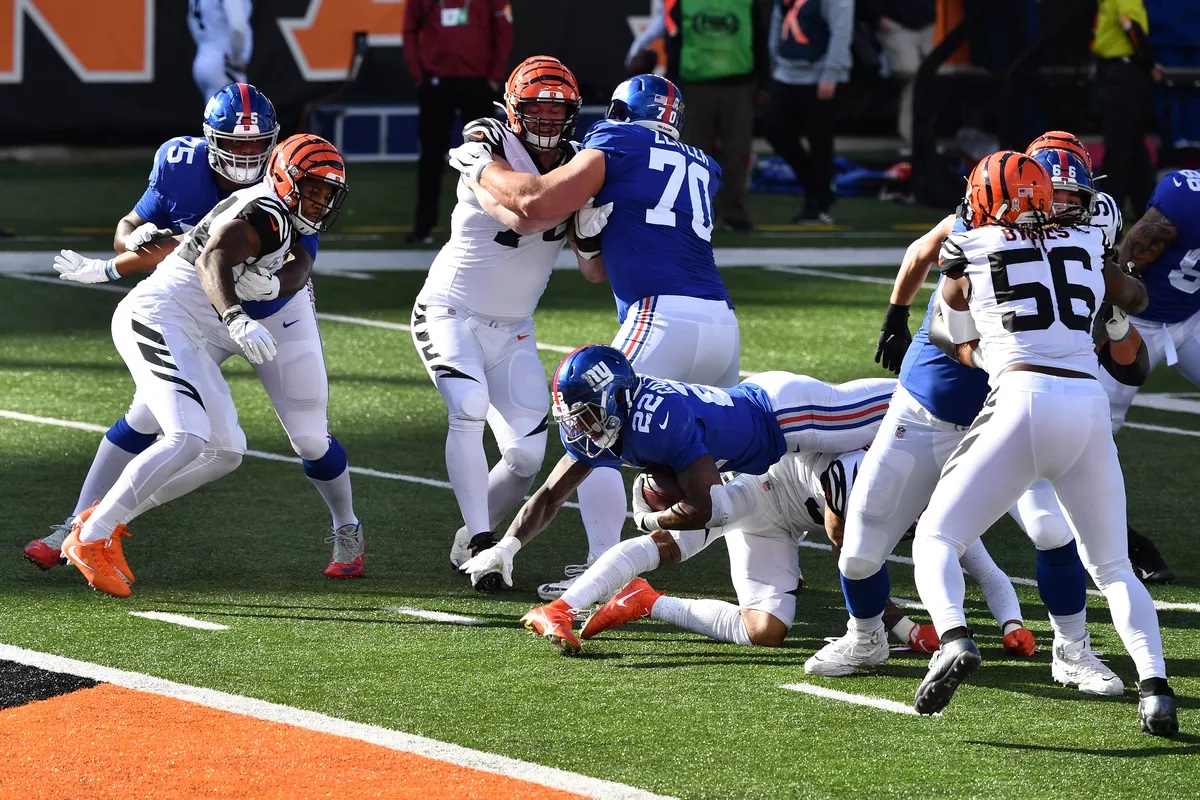 The Bengals crawl all the way back just to fumble away the game.

The Bengals’ defense kept the game close, but the offense was flat without Joe Burrow. The Giants won a close game, taking the 19-17 victory from the Bengals.

Brandon Allen made his first start for the Bengals in Joe Burrow’s absence. In his fourth career start, and his first for Cincinnati, he played quite the unmemorable game. Allen passed for 136 yards, one touchdown, and one interception, after completing 17 of his 29 attempts.

The Giants got the ball first and scored early. Daniel Jones passed to Evan Engram for 53 yards to set up a goal-to-go series. The Giants had to go for it on fourth down, but Wayne Gallman dove into the end zone for the score. Graham Gano’s extra point gave the Giants a 7-0 lead with 10:01 remaining in the first quarter.

The Bengals answered on the very next play. Brandon Wilson returned the following kickoff for 103 yards to the house. Eleven seconds after the Giants touchdown, the Bengals got the equalizer, with Randy Bullock’s extra point tying the game 7-7 with 9:50 remaining in the first.

After trading punts for most of the first half, Vonn Bell forced a fumble and returned it to plus territory. Giovani Bernard rushed for 19 yards on the drive to get the Bengals into field goal range. Bullock drilled the 44-yard kick, and the Bengals had their first lead of the game, 10-7 with 3:32 to go before halftime.

Allen finally found some rhythm, and got into the red zone for the first time in the game. A pass interference penalty in the end zone gave the Bengals the ball at the one-yard line. Allen threw to Tee Higgins for his first touchdown pass as a Bengal. With 2:33, the Bengals got the extra point to get closer, down only 19-17.

The Bengals forced the Giants into a three-and-out, and Alex Erickson returned the punt for 29 yards. At the 50-yard line, the Bengals only needed about 15 more yards to get into a spot where they could kick a game-winning field goal.

On the first snap from scrimmage, Allen took a strip-sack and lost possession of the ball. The Bengals went from being close to winning to sealing a defeat in one play.

The Giants would win 19-17, giving the Bengals their sixth one-score loss of the season and moving them down to 2-8-1.