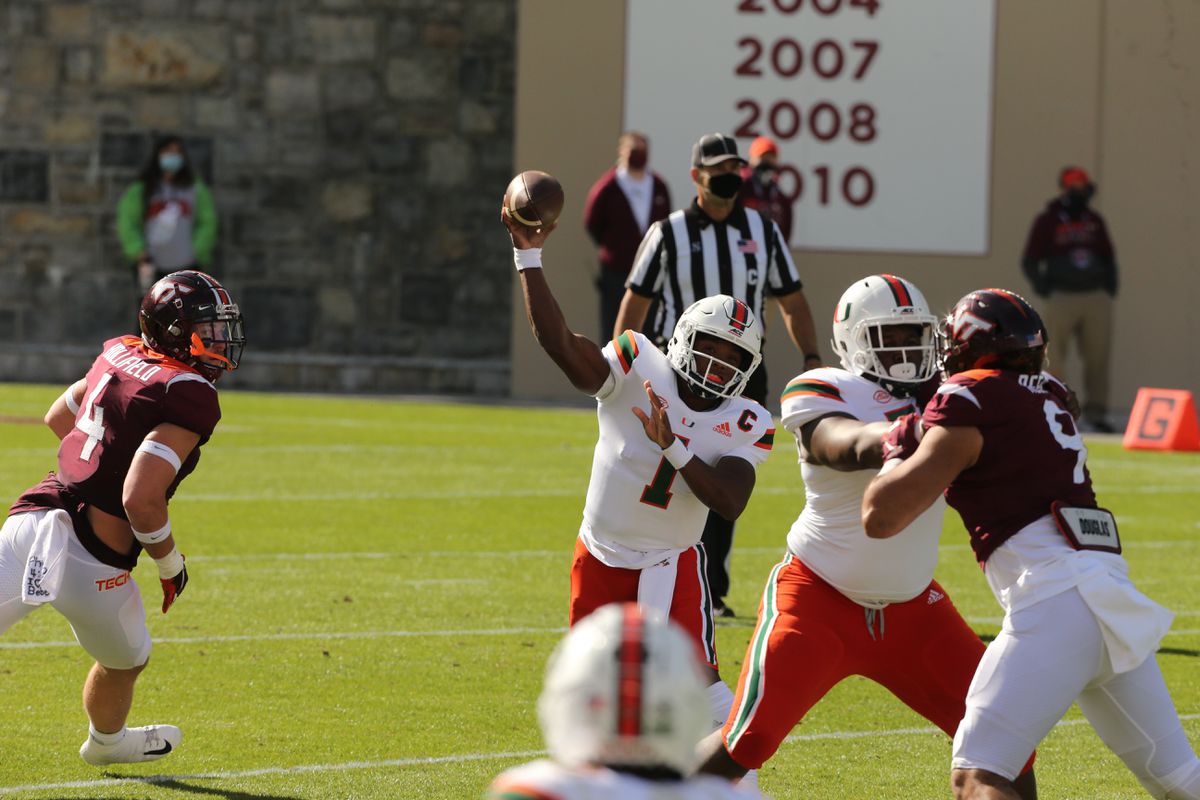 The Miami Hurricanes found a way to win in the fourth quarter for the second straight week.

UM earned a 25-24 comeback win at Virginia Tech on Saturday despite having 13 players out due to unspecified reasons.

Miami (7-1, 6-1) entered the game as a two point underdog. The ESPN Football Power Index favored Virginia Tech going into Saturday’s game, with Miami holding only a 37.8 percent win probability, according to the FPI.

The victory wasn’t pretty, but the bottom line is what matters most: the Hurricanes moved to 7-1 and continue to play meaningful games in the month of November.

The Hurricanes have three remaining games on the schedule to navigate for the rest of the 2020 season: Georgia Tech, at Wake Forest, and North Carolina.

How does the ESPN Football Power Index project Miami’s remaining schedule after gathering more information from the action over the weekend? This article takes a look at how the computer model views the Hurricanes.

Going into the Virginia Tech game, Miami ranked No. 29 on the FPI. The Hurricanes now rank No. 27.

The Hurricanes opened the season ranked in the mid-30s in the FPI.

Here’s how the FPI is calculated:

The Football Power Index (FPI) is a measure of team strength that is meant to be the best predictor of a team’s performance going forward for the rest of the season. FPI represents how many points above or below average a team is. Projected results are based on 10,000 simulations of the rest of the season using FPI, results to date, and the remaining schedule. Ratings and projections update daily.

Following the win over Virginia Tech, Manny Diaz was pleased with the way the Hurricanes found a way to win.

“The resilience of this team week in and week out is special,” Diaz said after the game. “It’s not shown for the three and a half hours on game day. Some of the things we had to overcome this week just to get here, just to play. And just the attitude that our guys kept, the way they wanted to go play. So proud of them. They, week in and week out, with all the adversity that they have to face. Find a way to make it. They play for each other so hard out there.”