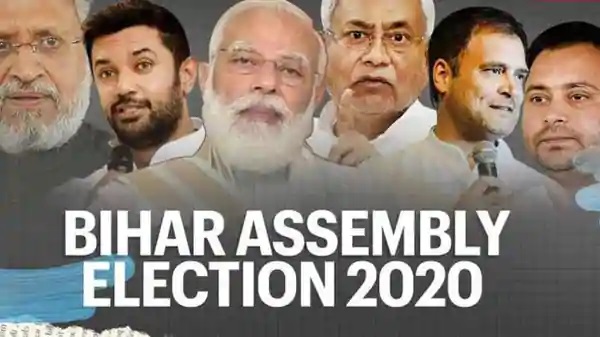 With the counting of votes slowed down by strict Covid-19 protocol, there is as yet no clear winner in Bihar. As the stalemate looks set to continue, senior BJP leaders Sushil Kumar Modi and Bhupendra Yadav reached the residence of incumbent Chief Minister and JD(U) president Nitish Kumar in Patna. According to sources, Union Home Minister Amit Shah also dialled Kumar and the two leaders spoke about the poll results and trends. The NDA is hovering on the majority mark of 122 while the RJD has overtaken the BJP as the single-largest party again. The JD(U) has been dented severely by Chirag Paswan’s LJP and the Congress has blamed AIMIM’s Asaduddin Owaisi for eating into its vote share allegedly at the behest of the BJP.

The National Democratic Alliance (NDA) maintained an edge over the Rashtriya Janata Dal (RJD)-led mahagathbandhan on Tuesday, winning four seats and leading in 121 others as counting progressed slowly in Bihar assembly polls 2020. The RJD, leading the opposition five-party alliance, has won two seats, and along with allies, is leading in 106 others, according to the Election Commission website. EC officials said over 1 crore votes were counted till around 1.30 pm out of nearly 4.16 crore votes polled in the three-phase elections. Out of nearly 7.3 crore voters, 57.09 percent had cast votes in the polls.Despite the NDA leading the table, having won or leading in 125 seats, three more than the number required for a simple majority in the 243-member assembly, it’s not done and dusted yet.

Having emerged as a senior partner of the NDA in Bihar for the first time in nearly two decades, the BJP finally seems to have come out of the shadow of its allies in the state but new alliance arithmetic has dragged down their overall vote share since the 2019 Lok Sabha polls. Riding on the ‘Modi wave’ in the 2019 Lok Sabha elections, the National Democratic Alliance, which included LJP, had garnered more than 53 per cent votes and won 39 out of 40 seats. In the Bihar assembly elections, LJP decided to contest on its own and has managed to win less than six per cent votes, while HAM and VIP which were in the opposition camp have become part of the NDA. As per the latest EC data, the NDA’s combined vote share, including that of BJP, JD(U), HAM and VIP, stands at less than 40 per cent. In comparison, the RJD-led grand opposition alliance has managed around 37 per cent votes. Party-wise, JD(U) had got 21.81 per cent votes in the 2019 Lok Sabha elections, but has got only about 15 per cent in the assembly elections. The BJP had got 23.58 per cent of votes in the general elections and has now got close to 20 per cent.