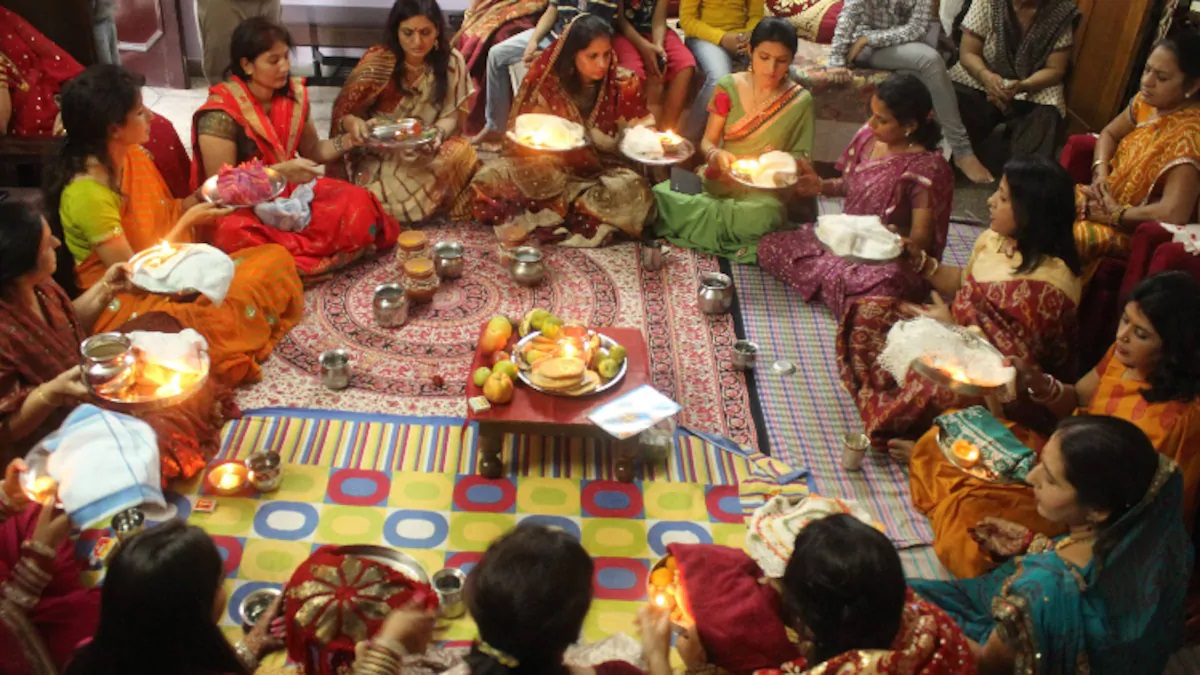 Karwa Chauth is a 1-day festival celebrated by Hindu women from North India except , Kumaon, and some parts of Central India on the fourth day after purnima (a full moon) in the month of Kartika. Like many Hindu festivals, Karwa Chauth is based on the lunisolar calendar which accounts for all astronomical positions, especially positions of the moon which is used as a marker to calculate important dates. The festival falls on the fourth day after the full moon, in the Hindu lunisolar calendar month of Kartik.

On Karwa Chauth, married women, especially in Northern India, fast from sunrise to moonrise for the safety and longevity of their husbands. The Karwa Chauth fast is traditionally celebrated in the states of Delhi, Haryana, Rajasthan, Punjab, Jammu and Kashmir, Uttar Pradesh, Madhya Pradesh and Himachal Pradesh. It is celebrated as Atla Taddei in Andhra Pradesh. Traditionally, it is not a part of Kumaoni or Garhwali culture, but it is observed by some Garhwalis. It is not observed in Kumaon, where it has faced resistance from women’s organisations and the Kumaoni orthodoxy.

The meaning of Karwa Chauth is offering Argya to the moon using an earthen pot known as Karwa on the Chaturthi of the Karthika month. It falls on the fourth day of the dark fortnight in the Kartika month every year. The origin of this festival is still very hazy but there are definitely some anecdotes associated with this festival. Some of the estimated stories are narrated below which shows the reason behind this celebration:

Tale of the Queen Veervati: Once upon a time there was a beautiful queen named Veervati who was the only sister among seven loving and caring brothers. In one of the Karwa Chauth she was at her parents place and began a strict fast after sunrise. In the evening she was waiting eagerly for the moonrise as she was suffering from hunger and thirst. The brothers were pained by seeing their sister in suffering. So, they created a mirror in a Pipal tree that made it look as if the Moon is up in the sky. Now, the moment Veervati broke her fast, the news that her husband is dead arrived. She kept on weeping and that’s when a Goddess arrived in front and revealed that she was tricked by her brothers. Now, she kept the Karwa Cahuth fast with full devotion and seeing the dedication, Yama, the lord of death restored life to her husband.

From the Pages of the Mahabharata: It is said that Draupadi also observed this Karwa Chauth. Once Arjuna, the one whom Darupadi loved the most went to the Nilgiri mountains for self-penalty and thus the rest of the brothers were facing challenges without him. Now, Draupadi remembered Lord Krishna in this situation to ask what should be done to resolve the challenges. Lord Krishna narrated a story of Goddess Parvati where in a similar situation she performed the Karwa Chauth rituals. So, Draupadi then followed the strict rituals of Karwa Chauth and Pandavas resolved their problems.

The Story of Karwa: There was a woman named Karwa who was deeply in love with her husband and this intense love gave her lots of spiritual powers. Once her husband was bathing in a river and that was when he was attacked by a crocodile. Now the courageous Karwa bound the crocodile with a cotton yarn and remembered Yama the Lord of death. Yama was seriously afraid of being cursed by such a devoted and doting wife and thus he sent the crocodile to hell and gave life back to her husband. The Story of Satyavan and Savitri: It is said that when Yama, the God of death came to acquire Satyavan’s life, Savitri begged in front of Yama to grant him life. But Yama was adamant and seeing that Savitri stopped eating and drinking and followed Yama as he took her husband away. Yama now said Savitri that she can ask of any other boon except the life of her husband. Savitri being a very clever woman asked Yama that she wants to be blessed with children. She is a devoted and loyal wife and won’t let any kind of adultery. Thus, Yama had to restore the life into Satyavan so that Savitri can have children.

Why We Celebrate Karwa Chauth?

If we see the popularity of this festival, we see the prominence of North and North Western regions of our country. A huge chunk of the male population of these regions were the soldiers of the Indian Army and officials of the Military Forces and for the safety of these people, women of these regions started fasting. These armed forces, policemen, soldiers, and military personnel protected the country from enemies and the women used to pray to the God for the longevity of their men. The time of this festival coincides with the initiation of the Rabi cropping season which is the wheat sowing season in these aforementioned areas. The women of the families fill the earthen pot or Karwa with wheat grains and offer to the God praying for a great Rabi season.

In ancient India, women of 10-13 years of age were married. Hardly they could enjoy their childhood or early teenage in such a marriage. Communication was also a big obstacle in those days. So, they couldn’t come to their parent’s home easily and it was also not considered good. So, you can say from an early age, a woman had to take the full responsibility of a new household. From cooking to cleaning, she was the in-charge. But, she was basically all alone away from the loved ones in an unknown house and without any friends too. Where would she go while feeling alone or missing home? So, to resolve this problem, the women started celebrating Karwa Chauth in a grand way where married women of the whole village and some nearby villages used to congregate in one place and spend the day in joy and laughter. They befriended each other and called each other God-friends or God-sisters. One can say that this festival started as a means of enjoyment and to forget the fact that they are alone in their in-laws place. They celebrated the union among themselves on this day and gifted each other bangles, lipsticks, sindoor, etc. to remind each other that there is always a friend somewhere.