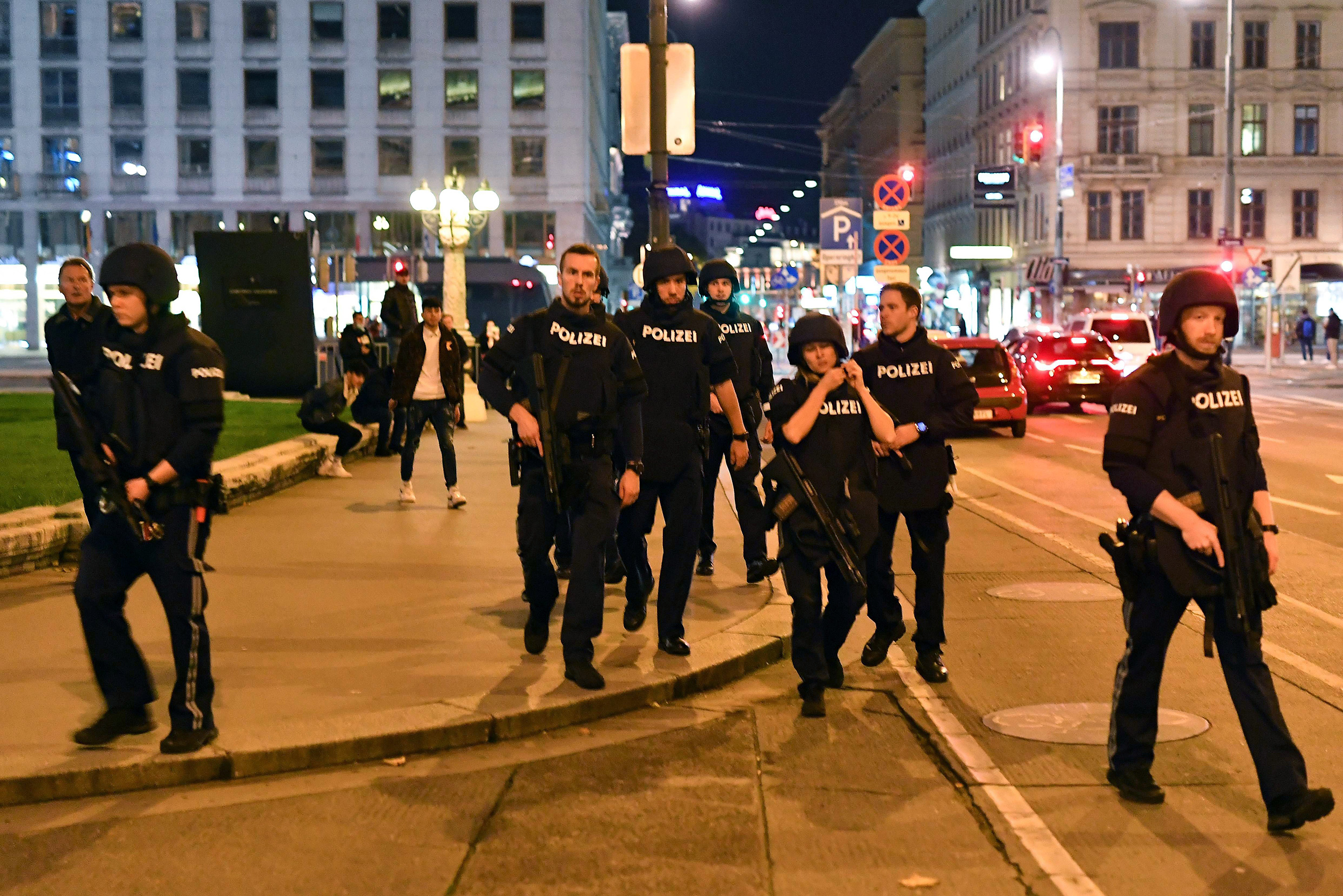 Armed police arrive at the first district near the state opera in central Vienna on November 2, 2020, following a shooting near a synagogue. - Multiple gunshots were fired in central Vienna on Monday evening, according to police, with the location of the incident close to a major synagogue. Police urged residents to keep away from all public places or public transport. One attacker was "dead" and another "on the run", with one police officer being seriously injured, Austria's interior ministry said according to news agency APA. (Photo by JOE KLAMAR / AFP) (Photo by JOE KLAMAR/AFP via Getty Images)

Multiple gunshots were fired in central Vienna on Monday evening, according to police, with the location of the incident close to a major synagogue. Police urged residents to keep away from all public places or public transport. One attacker was “dead” and another “on the run”, with one police officer being seriously injured, Austria’s interior ministry said according to news agency APA.

Vienna, Austria: A huge manhunt was underway Tuesday after gunmen opened fire at multiple locations across central Vienna, killing at least four people in what Austrian Chancellor Sebastian Kurz described as a “repulsive terror attack”.
One of the suspected killers, identified as an Islamic State group sympathiser, was shot dead by police who said they were searching for at least one more assailant still at large.

The shooting rampage, in six locations including near a synagogue and the world famous opera house in the heart of Vienna on Monday evening, was carried out by “several suspects armed with rifles”, police said.

Helicopters were flying overhead as police sealed off the city in the hunt for other attackers, while neighbouring countries stepped up border checks.

The shooting erupted just hours before Austria was to re-impose a coronavirus lockdown, with people out in bars and restaurants enjoying a final night out.

It follows a spate of Islamist attacks in France and triggered an outpouring of solidarity from Western leaders including US President Donald Trump.

Two men and two woman were killed in the attack, an interior ministry spokesman said, while about 15 more have been injured, seven seriously. Police also said an officer had been hurt.

The first shots were heard at around 8 pm (1900 GMT) in the city’s centrally located first district.

“It sounded like firecrackers, then we realised it was shots,” said one witness quoted by public broadcaster ORF.

A gunman “shot wildly with an automatic weapon” before police arrived and opened fire, the witness added.

Another spoke of at least 50 shots being fired.

“All the signs make it clear it’s a radicalised person and a person who feels closely connected to IS,” Interior Minister Karl Nehammer said of the attacker.

Police had used explosives to blast their way into the apartment of the dead man who had been “heavily armed”, he told a press conference.

The minister had earlier said: “According to what we currently know, there is at least one attacker who is still on the run.”

It was unclear how many assailants were involved.

Speaking to ORF, Kurz said the attackers “were very well equipped with automatic weapons” and had “prepared professionally”.

He also tweeted: “Our police will act decisively against the perpetrators of this repulsive terror attack.

“We will never be intimidated by terrorism and we will fight this attack with all means.”

Kurz said that while police were concentrating on the anti-terror operation, the army would take over the security of major buildings in Vienna.

Nehammer urged Vienna residents to remain in their homes and keep away from all public places or public transport. He said children would not be expected to go to school on Tuesday.

An AFP photographer said large numbers of police were guarding an area near the opera house.

The president of Vienna’s Jewish community Oskar Deutsch said shots had been fired “in the immediate vicinity” of the Stadttempel synagogue, but added that it was currently unknown whether the temple — closed at the time — had been the target.

At the busy bars and restaurants, people were told to remain indoors.

“At the beginning, I thought to myself that maybe we were making an American film or that they had drunk too much,” said waiter Jimmy Eroglu, 42.

But then he heard shots. “The police came in and said, ‘you all have to stay inside because there’s a probably a dead man there'”.

Robert Schneider, who lives in central Vienna, went out and found two lasers trained on his chest.

“Hands up, take off your jacket,” officers shouted at him, the 39-year-old told AFP. “We had seen nothing, heard nothing. We are in shock.”

Austria had until now been spared the sort of major attacks that have hit other European countries.

Germany stepped up checks at the Austrian border as Chancellor Angela Merkel said: “The fight against these assassins and those who instigate them is our common struggle.”

President Emmanuel Macron of France tweeted: “We French share the shock and sorrow of the Austrian people”.