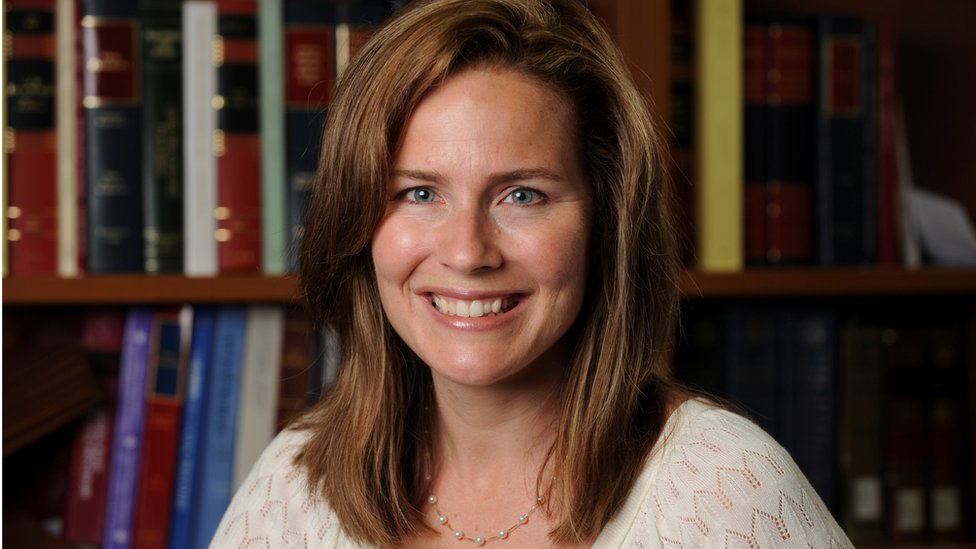 Newly confirmed U.S. Supreme Court Justice Amy Coney Barrett will immediately be embroiled in some of the nation’s biggest legal battles, including cases that could determine whether the president who nominated her gets four more years in the White House. The 48-year-old Barrett, who will take her seat just a week before Election Day, joins a court already deliberating pending voting disputes from North Carolina and Pennsylvania. She could play a pivotal role in any post-election legal fights and will take part when the court hears a challenge to the Affordable Care Act a week after the election. The Republican-controlled Senate confirmed Barrett on an almost party-line 52-48 vote Monday night. Barely an hour later, she appeared alongside a beaming President Donald Trump at the WhiteHouse, where arch-conservative Justice Clarence Thomas administered one of the two required oaths of office. Barrett took the second oath at the court Tuesday morning from Chief Justice John Roberts, letting her start work as a justice.

US President Donald Trump on Monday celebrated the Senate confirmation of Justice Amy Coney Barrett to the Supreme Court, barely a week before the country votes to choose its next commander-in-chief.

“The Barrett family has captured America’s heart,” Trump said with Barrett at his side. “It is highly fitting that Justice Barrett fills the seat of a true pioneer for women, Justice Ruth Bader Ginsburg.”

Barrett’s nomination caps an extraordinarily fruitful run for conservatives during this presidency when it comes to the highest court: she is Trump’s third Supreme Court nominee to get confirmed to the court, which is now tilted 6-3 heavily in favour of the right.

The Republican-controlled Senate voted 52-48 vote to confirm Barrett for what will be a lifetime appointment. Not a single Democrat voted ‘Yes’ while a lone Republican, Susan Collins, who faces a tough re-election, voted against the confirmation.

Because chief justices have lifelong tenures, a majority one way or the other can have a profound impact on the lives of millions of Americans if crucial cases such as those linked to abortion and voting rights get decided by the Supreme Court.

With the 48-year-old Barrett’s nomination coming so close to the presidential election, she may find herself deliberating on issues that could determine the next presidency – in case the November 3 election fails to yield a clear winner and the dispute is taken to the highest court of the land.

The 2020 election and the Supreme Court

President Trump has openly admitted that he wanted Barrett to be confirmed before election day so that she could cast a decisive vote should any election-related dispute arise.

If as the polling suggests, Biden is leading once the votes are started to be counted, Trump has indicated in the past that he could take the battle to the court citing the reason that postal ballots (he has often raised doubts over mail-in voting) could take days to count. This might be an even more pertinent issue if the election is tighter than anticipated.

Democrats fear that Trump could also declare victory and later claim that mail-in ballots which are still to be counted are a fraud, thus dragging the case to Supreme Court, even though there is scant evidence about postal voter fraud.

Another scenario in which the Supreme Court could have a say is if the election is very close and one or two battleground states determine the outcome, like in the 2000 George Bush-Al Gore presidential election, which was decided in favour of the Republican: the Supreme Court halted a recount in Florida, effectively handing a victory to Bush by a mere 537 votes.

Some legal and constitutional experts have also flagged a slightly improbable scenario, but given Trump’s unconventional presidency, it cannot be entirely ruled out.

It goes something like this: The Republican-controlled legislatures and the Democratic governors of battleground states end up submitting two different poll results – taking advantage of claims of voter fraud or the fact that postal votes are yet to be counted.

Since the rules are not clear on what the US Congress should do in such a situation, it could head to the Supreme Court.

While it’s by no means clear that if any of these possibilities arise, Justice Barrett will vote one way or the other, many Democratic supporters are keeping their fingers crossed and hoping that a clear vote decides the outcome, which is not contested.