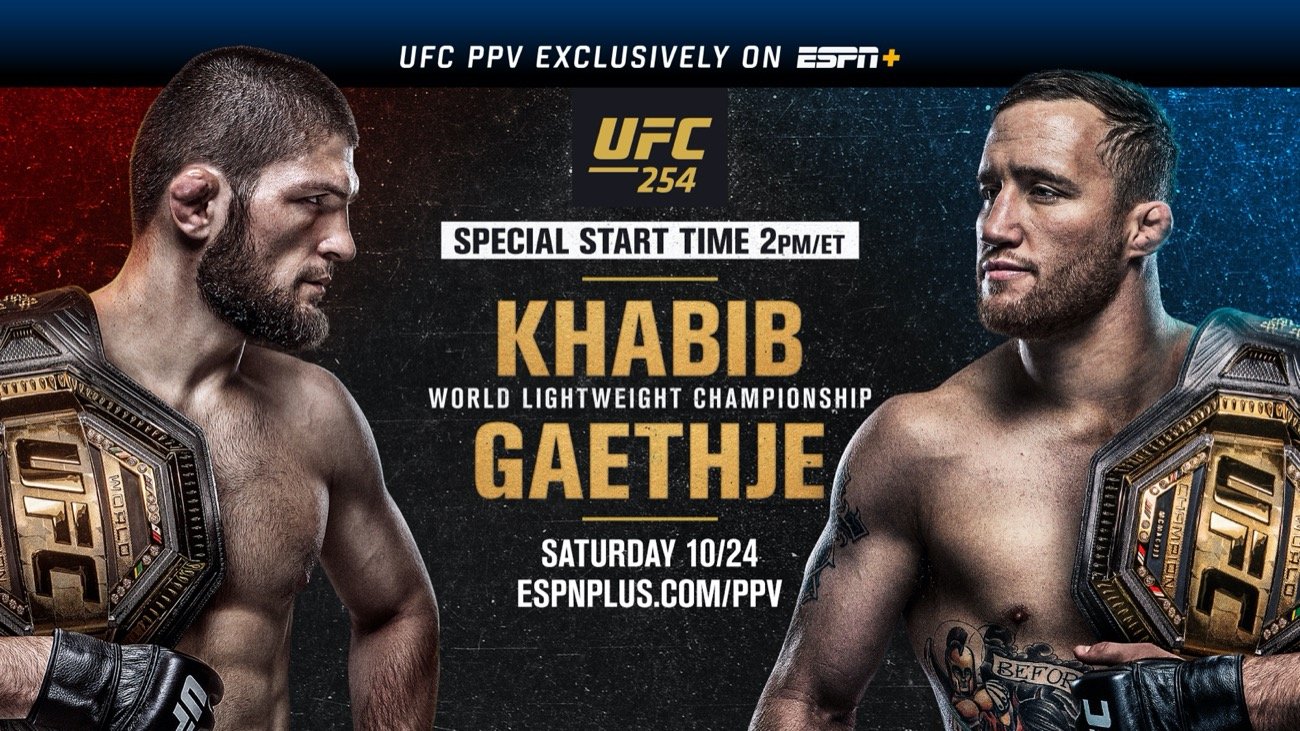 Khabib Nurmagomedov’s undefeated record will be on the line at UFC 254 this Saturday, as the Russian MMA champ takes on American Justin Gaethje for the UFC lightweight championship title. Nurmagomedov (a.k.a. “The Eagle”) looks to add another victory to his perfect 28-0 record as he defends his title for the third time against interim titleholder Justin Gaethje, whose 22-2 record puts him right in the mix against Khabib.

UFC 254 takes place this Saturday, October 24 with the fights airing live from Yas Island in Abu Dhabi, also known as “Fight Island.” This will be the final bout from Dubai for now, as UFC 255 returns to Las Vegas in November.

While previous events from Fight Island have aired in the evenings, the UFC 254 main card is set for 2pm ET / 11am PT. Prelims start at 12pm ET / 9am PT.

You can watch UFC 254 live online via ESPN+, which lets you stream the fight on your phone, tablet, laptop or TV. The main card is a pay-per-view event available exclusively on ESPN+. To watch UFC 254, simply sign up for an ESPN+ membership and then pay the $64.99 PPV fee.

An ESPN+ membership costs $5.99 per month or $49.99 per year. Your best deal is to snag ESPN’s bundle promo, which gets you a year-long ESPN+ membership plus instant access to UFC 254 for just $84.98. The deal saves you 25%, and you’ll have access to ESPN+ for an entire year. Get the bundle to watch UFC 254 on PPV this Saturday, and get free access to weekly UFC fights, which stream on ESPN+ exclusively.

UFC 254 Fight Card: Who Will be Fighting?

All eyes will be on the UFC 254 title bout, which pits Gaethje (a.k.a. “The Highlight”) against one of the most dominant MMA champions in history in Nurmagomedov, who has taken down the likes of Conor McGregor, Dustin Poirier and Edson Barboza, among other former champs.

The UFC 254 fight card also features Robert Whittaker taking on top contender Jared Cannonier. Whittaker, the former middleweight champion, continues to work his way back for a chance at the title.

Other fights to watch include a heavyweight bout featuring Alexander Volkov vs. Walt Harris, and a women’s flyweight bout between Lauren Murphy and Liliya Shakirova.

UFC 254 PPV viewers can also catch Jacob Malkoun vs. Phillip Hawes in a middleweight fight, and Magomed Ankalaev vs. Ion Cutelaba in a light heavyweight match.

The official UFC store has a ton of merch available for the fight, from posters and T-shirts to a limited-edition Nurmagomedov action figure. This is the only place to get officially-licensed UFC gear, and the best place to find Nurmagomedov and Gaethje-branded merchandise.

The UFC Store is also a great place to stock up on holiday gifts this year, with everything from signed memorabilia to unisex “Fight Island” hoodies to a 1000-piece, UFC-themed jigsaw puzzle. You can see the full selection of UFC merch here.

UFC 254 airs this Saturday, October 24. Prelims for UFC 254 start at 12pm ET, followed by the main card at 2 pm ET. UFC 254 is available exclusively to ESPN+ subscribers via pay-per-view. Sign up to watch the fight here.