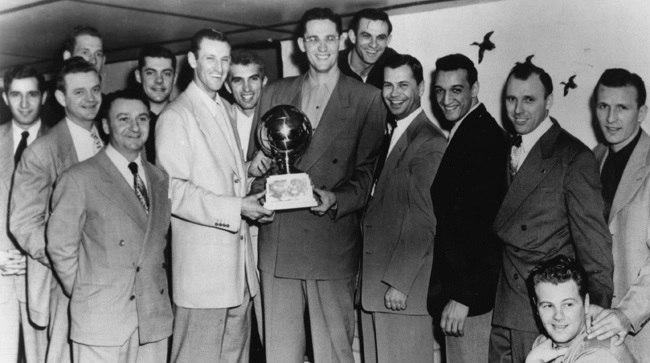 Sid Hartman (March 15, 1920 – October 18, 2020) was an American sports journalist for the Minneapolis Star Tribune and the WCCO 830 AM radio station. For 20 years, he was also a panellist on the weekly television program Sports Show with Mike Max, which aired Sunday nights at 9:30 p.m. on WUCW 23 in the Twin Cities metro area. He continued writing for the Star Tribune until his death in 2020.

Legendary Minnesota media member Sid Hartman, who once was the de facto G.M. of the Minneapolis Lakers, died Sunday. Hartman was 100 years old.

The Star Tribune published Hartman’s final article on Sunday. He was still contributing three or four columns per week to the newspaper.

“Our hearts are broken with the news of Sid Hartman’s passing,” Vikings owners Zygi and Mark Wilfe said in a statement. “It is nearly impossible to put into words what Sid meant to the sports world and to Minnesota. He was an iconic sports figure, a tenacious reporter and a tireless advocate for his beloved state. His doggedness and work ethic were unmatched, but it was Sid’s ability to nurture relationships that truly set him apart. He was a confidant and a loyal friend to countless athletes and coaches across the country.

The impact Sid had on collegiate and professional sports can never be replicated and will never be forgotten. His presence and his personality were constants during the Vikings first 60 seasons. Sid welcomed our family to town in 2005, and we will always appreciate his support for us as owners and for the Vikings franchise. Our prayers are with the entire Hartman family.”

We extend our condolences to Sid Hartman’s family, friends, colleagues, the Vikings, and all Minnesotans who will feel the impact of the passing of a man who crafted a one-of-a-kind career.

“Sid covered the University of Minnesota for more than 70 years and did so with skill and fairness. He had a unique way of building longstanding and trusting relationships and was able to walk into any office or stadium unannounced and get the interview. Few individuals have impacted Gopher Athletics like Sid, and I will miss our visits and conversations. We will mourn his loss, but we will also celebrate his life. Sid was one-of-kind and will be greatly missed. I extend our sympathies to his family and loved ones.”

“Sid was one of the first people I met when I was hired at Minnesota. He was sitting in the front row of the press conference, like he always did, and had an unmistakable presence about him. Whether it was after a game, on the radio or an impromptu visit at my home, he asked the questions that Minnesotans wanted answers to. I was able to get to know him on a personal level and we became close friends. I always enjoyed spending time with Sid and was fortunate to celebrate a couple of birthdays with him as well. Sid was the absolute best, and I will miss him dearly. Nobody loved Minnesota sports like Sid. He is and always will be Minnesota. My wife Heather and I extend our deepest sympathies to his family and friends.”

“Simply stated, Sid Hartman was a legend. The sports world, especially Minnesota, lost a great man. Every time I spoke to Sid, I was blow away by his commitment to his work. Sid was Minnesota sports and he will be dearly missed, especially at Williams Arena.”

“This is a sad day for the State of Minnesota and the entire sports world with the passing of my close, personal friend Sid Hartman. Sid was a one-of-a-kind G.O.A.T., and a unique legend who was a tireless worker and a passionate reporter who loved the Maroon and Gold. My 40-year friendship with Sid is filled with many stories and special conversations that enriched my life and I will forever cherish. RIP, Sid.”

Originally posted to Twitter.
Waking up on weekend mornings reading Sid’s column with my dad. Recapping our favorite teams and what to look for coming up. The Vikes, Gophs, Twins, North Stars, and Wolves among other teams covered by Sidney. Going to the U, it quickly became on of my goals to be covered by Sid. My dad always told me, just do what Sid says, “win baby.” Win and they will come became my mentality. It will always be one of the highlights of my career, my sophomore year when we beat a ranked Purdue team at Williams area in front of 10,000 fans to not only have Sid in the arena, but ask to meet me after the game. So, Sid thank you for everything you have done for Minnesota sports! Thank you for inspiring me to push me and my team a level that no matter what sport or gender, if you win and do it the right way, you can capture the attention of an entire state. “Win baby” RIP Sid.

“Sid is a legend in the sports world in Minnesota. He touched everyone in some way through his extraordinary life and career. May we all have the unwavering passion for what we do that Sid demonstrated over an amazing career. He wil be truly missed. Rest in peace to a true Minnesota legend”

“We are heartbroken to learn of the passing of Sid Hartman. Sid began covering the Gophers in 1944 and continued to do so for parts of nine decades. His first article for the Minneapolis Tribune in 1948 covered the Gophers’ Hall of Fame coach Bernie Bierman and the upcoming spring game. He interviewed 15 Gopher head coaches during his career, including P.J. Fleck last Thursday. Gopher Football has had no greater friend or advocate than Sid, and we extend our deepest sympathies to his family, friends and loved ones.”