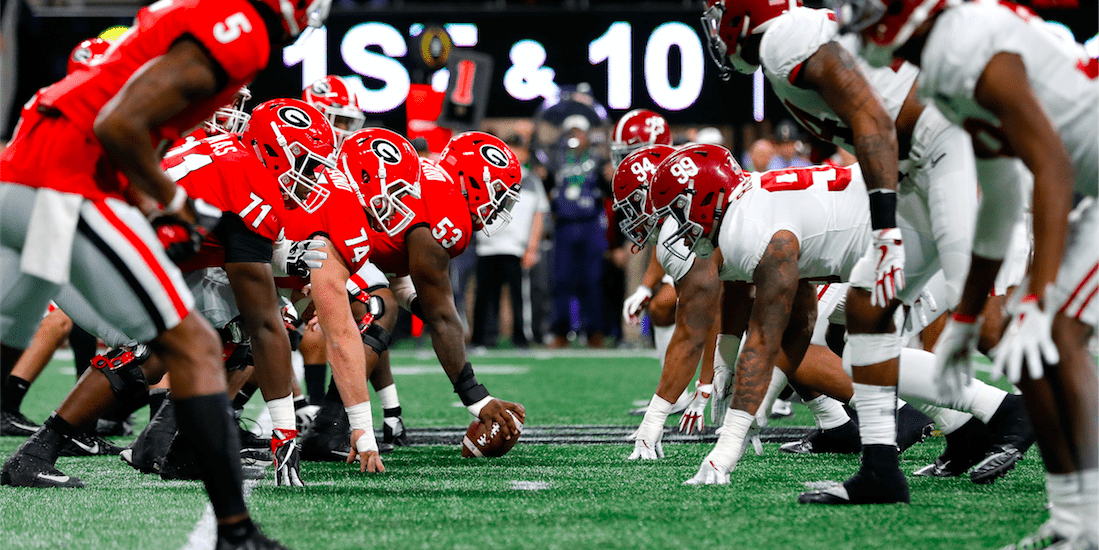 Once again, the Alabama-Georgia game followed a familiar script.

This year’s version spared Bulldogs fans from any last-minute heartache, but the end result—a 41–24 Crimson Tide victory—hit many of the same notes as the last two meetings between these teams.

For three straight matchups in this series, Georgia has held the lead after two quarters, only to watch it slip away in the second half. Georgia led, 21–14, at halftime of the 2018 SEC title game; the Bulldogs held a 13–0 lead at halftime during the 2017 national championship game. They lost both times in the game’s final moments.

Saturday’s finish was much more decisive. No. 2 Alabama outscored No. 3 Georgia 21–0 in the second half behind a sturdy, ball-hawking defense and strong performances on offense by quarterback Mac Jones and running back Najee Harris.

The game featured two interceptions in the first minute, as Jones threw a pick on the first offensive play of the game. Georgia quarterback Stetson Bennett IV returned the favour three plays later, setting up a Crimson Tide touchdown on a 40-yard pass from Jones to John Metchie III to give Alabama a 7–0 lead.

The Georgia offense took some time to find its groove. The Bulldogs gained 11 yards in 11 plays over their first three drives, which resulted in an interception and two punts. They finally got on the board late in the first quarter on a 10-yard scoring run by Zamir White, which capped a 10-play, 66-yard drive and tied the score, 7–7.

After an ensuing Alabama punt, the two offenses traded scoring drives, with Georgia eventually taking a 24–17 lead with 0:23 left in the second quarter. From there, it was all Tide. Alabama kicker Will Reichard hit a 52-yard field goal as time expired to cut the lead to 24–20.

The Alabama defense set the tone in the second half, forcing Georgia to punt on its first two possessions. The Tide took the lead for good with four minutes left in the third quarter on a 90-yard touchdown strike from Jones to Jaylen Waddle. Waddle and fellow wideout DeVonta Smith did damage to Georgia’s secondary all night, combining for 17 catches for 328 yards and three scores.

Following Waddle’s score, Georgia drove the ball to the Alabama 25-yard line before Bennett’s third-down pass attempt was intercepted by Malachi Moore. Alabama scored again five plays later to extend the lead to 34–24. Bennett was picked off again three plays later to virtually seal the win for the Tide.

The win improves Alabama coach Nick Saban’s record against his former assistants to a perfect 22–0. Georgia coach Kirby Smart coached under Saban—who was cleared to coach this game just hours before kickoff following a COVID-19 scare—from 2007 to 2015. Alabama has now won the last six meetings against Georgia, with the Bulldogs’ last win coming in 2007.