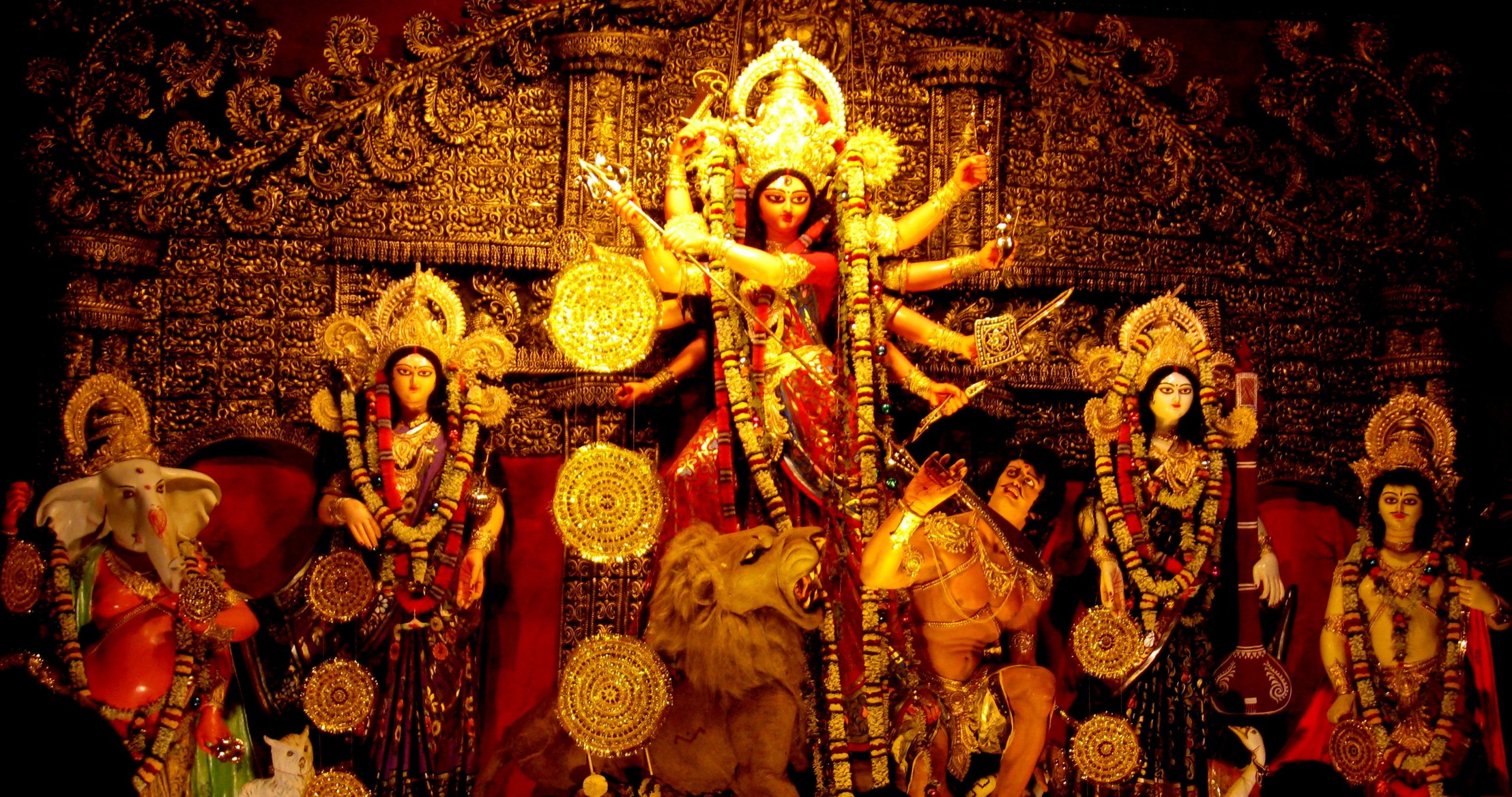 The Story Behind Navratri:-

Navratri is a festival that is full of excitement and colour, a time for family and friends to come together and celebrate. Each of the nine days is dedicated to Goddess Durga’s nine avatars and considered very auspicious. In each part of India, it has a different significance.

The story associated with Navratri is the battle that occurred between Goddess Durga and the demon Mahishasura. Mahishasura had been granted immortality by Lord Brahma and had been told that he could only be defeated by a woman. He attacked Trilok (Earth, Heaven and Hell), and the Gods were not being able to defeat him.

Finally Lord Brahma, Lord Vishnu and Lord Shiva together created Goddess Durga, who finally defeated Mahishasura. She fought with him for 15 days, and the demon kept changing his form. Mahishasura would take various forms to confuse Goddess Durga. Finally, when he turned into a buffalo is when Goddess Durga killed him with her trishul. It is on the day of Mahalaya that Mahishasura was killed. Each day of Navratri has a separate colour attached to it. The word Navratri is derived from Sanskrit, meaning nine nights – nava (nine) ratri (night). On each day a different form of Goddess Durga is worshipped. They are Goddess Shailputri (Day 1), Goddess Brahmacharini (Day 2), Goddess Chandraghanta (Day 3), Goddess Kushmanda (Day 4), Goddess Skandamata (Day 5), Goddess Katyayani (Day 6), Goddess Kaalratri (Day 7), Goddess Mahagauri (Day 8) and Goddess Siddhidatri (Day 9).

In the East and various parts of North-East India, Navratri is celebrated as Durga Puja, where the festival symbolizes the victory of Goddess Durga over demon Mahishasura, signifying the victory of good over evil. In the Northern and Western parts of India, Ram Leela (retelling of the Ramayana) is held, ending in Dusshera, where effigies of Ravana are set on fire to signify Lord Ram’s victory over Ravana.

Navadurga and significance of each day of Navratri:-

Devi is worshipped in 9 forms known as Navadurga. The significance of each day of Navratri is attached to a form of the Mother Divine.

On the first day, Devi Shailaputri is worshipped. In this form, Devi Parvati is revered as the daughter of Himalaya Raja. Shaila means extraordinary or rising to great heights. The divine consciousness represented by Devi always surges from the peak. On this first day of Navratri, we propitiate Devi Shailaputri so that we may also attain the highest state of consciousness.

On the second day, Devi Brahmacharini is propitiated. Devi Brahmacharini is the form of Devi Parvati in which she undertook severe penance to have Lord Shiva as Her consort. Brahma means divine consciousness and achar refers to behavior. Brahmacharya is the behavior or an act that is established in divine consciousness. This day is especially sacred to meditate and explore our inner divinity.

On the third day, Devi Chandraghata is the presiding Devi. Chandraghata is the special form that Devi Parvati assumed at the time of Her marriage with Lord Shiva. Chandra refers to the moon. The moon represents our mind. The mind is restless and keeps moving from one thought to another. Ghanta is a bell which produces only one kind of sound always. The significance is that when our mind is established at one point, i.e Divine, then our prana (subtle life force energy) gets consolidated leading to harmony and peace. This day thus signifies withdrawing from all vagaries of the mind, with a single focus on Mother Divine.

On the fourth day, Mother Divine is worshipped as Devi Kushmanda. Kushmanda means a pumpkin. Ku means little, ushma means energy and anda refers to egg. This entire universe which arose from the cosmic egg (hiranyagarbha) is manifested from an infinitesimal energy of Devi. A pumpkin also represents prana as it has the unique property of absorbing and radiating prana. It is one of the most pranic vegetables. On this day, we worship Devi Kushmanda who showers us with Her divine energy.

Skandamata means Mother of Skanda. On the fifth day, the motherly aspect of Devi Parvati is worshipped. In this form, she is the mother of Lord Karthikeya. She represents motherly affection (vatsalya). Worshiping this form of Devi brings abundance of wisdom, wealth, power, prosperity and liberation.

On the sixth day, Devi manifests as Katyayani. It is a form that Mother Divine assumed to annihilate the demonic forces in the universe. She was born from the anger of the gods. She is the one who slayed Mahishasura. As per our scriptures, anger that supports dharma (righteousness) is acceptable. Devi Katyayani represents that divine principle and form of the Mother Divine who is behind natural calamities and disasters. She is the anger that arises in creation to restore balance. Devi Katyayani is invoked on the sixth day to put an end to all our inner foes that are an obstacle on the path of spiritual evolution.

On the seventh day, we invoke Devi Kalaratri. Mother Nature has two extremes. One is terrifying and devastating. The other is beautiful and serene. Devi Kalaratri is a fierce form of Devi. Kalaratri represents the dark night. Night is also considered an aspect of Mother Divine as it is night that brings solace, rest and comfort to our souls. It is only at night that we get a glimpse of infinity in the skies. Devi Kalaratri is that infinite dark energy that houses innumerable universes.

Devi Mahagauri is that which is beautiful, gives momentum and freedom in life. Mahagauri represents the beautiful and serene aspect of Nature. She is that energy which propels our lives and also liberates us. She is the Devi who is worshipped on the eighth day.

On the ninth day, we worship Devi Siddhidatri. Siddhi means perfection. Devi Siddhidatri brings perfection in life. She makes the impossible, possible. She takes us beyond the ever reasoning logical mind to explore the realm beyond time and space.