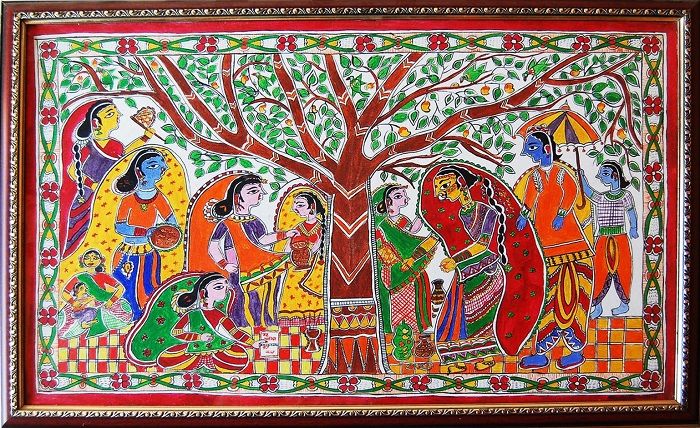 Themes of nature and mythology on a canvas from Mithila, Bihar.

Also known as Mithila painting due to its origins in the Mithila region of India and Nepal, Madhubani is a traditional Indian folk art made on canvas, cloth or cow dung washed hand paper. Natural dye and colours are used in the creation of Madhubani artworks with geometrical figures and vibrant colours being key elements. Commonly depicted subjects in Madhubani paintings are Ardhanarishvara (depicted as half male and half female which is believed to be a composite androgynous form of the Hindu God Shiva and His consort Parvati – a unison of supreme powers), Mythological characters (Ram, Sita, etc), Marriages, Festivals, Sun and Moon and many more.

The Madhubani style of painting can be traced to the Madhubani district in Bihar, literally meaning ‘a forest of honey’, where women spent a lot of time making these paintings on the walls of their homes. Mainly attributed to the upper caste, in the beginning, this was later taken up by women across all castes. The women used their keen sense of beauty to create evocative paintings of gods and goddesses, animals and characters from mythology, using natural dyes and pigments and painted with the help of twigs, fingers and matchsticks.

Natural colours used in Madhubani painting before the advent of industrial colours always convey a softer, more harmonized appearance. Even while the naturally made pinks, blues and yellows are vivid, in contrast to the chemical-based colours of today, they lack the touch of nature and artists stepping out into the marketplace cater more to popular taste than those of the cognoscenti.

Few artists wish to take the trouble of creating paintings in natural colours unless they know they will find the right price for it or if they decide to go back to their roots and reassert their traditional beliefs.

The Mithila form practised by the upper caste communities are slowly merging with the distinct styles, forms and colours of the lower caste Godna paintings. This form of painting evolved from the practice of Nations, women in gipsy groups who tattooed the bodies of the very poor castes since they could not afford jewellery.

The more well-established Madhubani artists now reach international platforms and have gained confidence to innovate dramatically on any kind of surface like fibre glass, metal, cloth or canvas. They ring their own world view to contemporary subjects on the environment, international events and their own experiences of new surroundings.